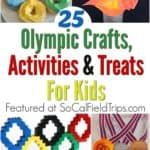 The 2021 Summer Olympics start on July 23 and runs through August 8.  Get your children interested and involved in this year’s Olympics by having them make one of these 25 Olympic Crafts, Activities and Treats for Kids!

From Olympic gold medals to glow in the dark Olympic torches to Lego inspired Olympic mascots, there is bound to something for every age level.  Each craft is also original, easy and fun to do.   Plus, these Olympic crafts are fun to make as a family and decorate your home with.

DIY Olympic Origami Bracelets – All For The Boys

O is for “Olympics” Craft – I Can Teach My Child