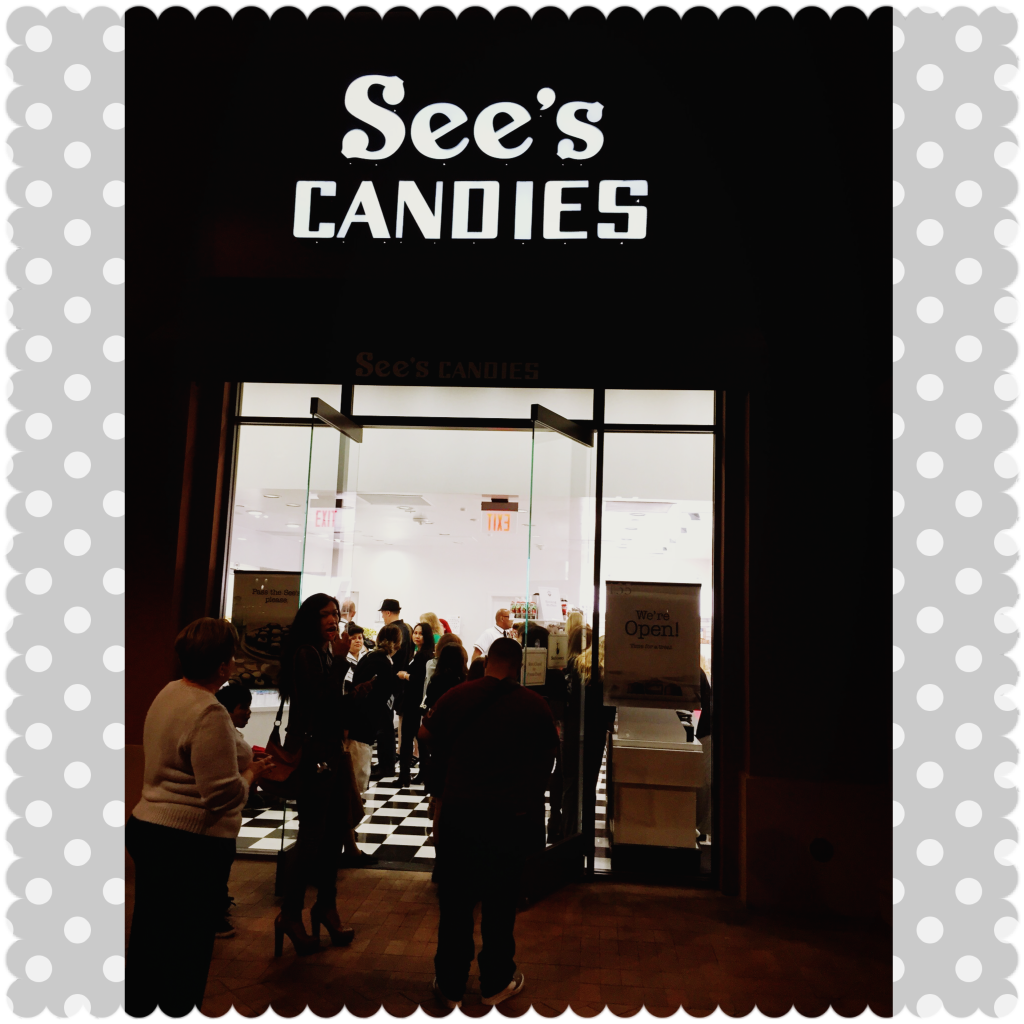 Last night, my mom and I got a sneak peek behind the scenes of the new See’s Candies store opening on Friday, November 14 at Fashion Island in Newport Beach. 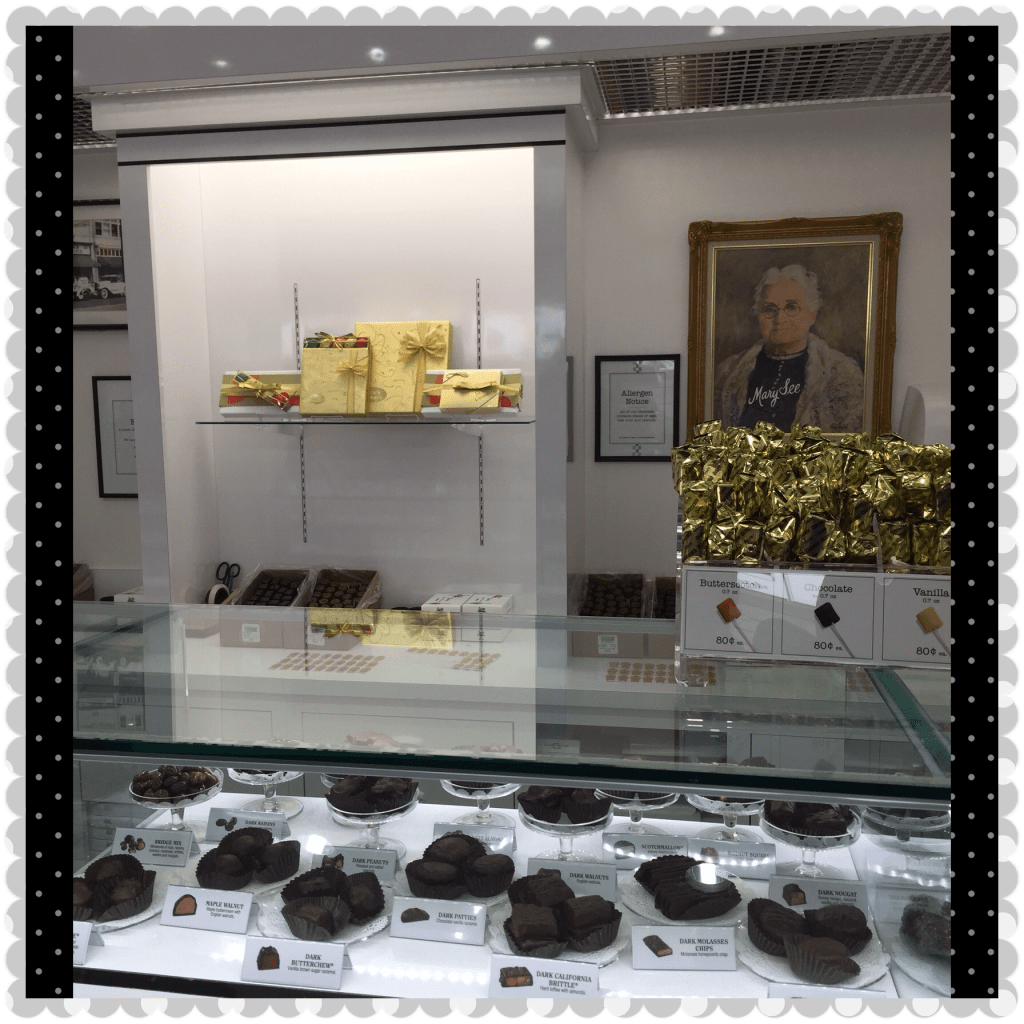 We were anxiously awaiting for the event to start with dreams of creamy chocolate goodness in our minds.  See’s Candies sells over 26 million candies per year, and after attending the grand opening at Fashion Island, my mom and I may make it 27 million! 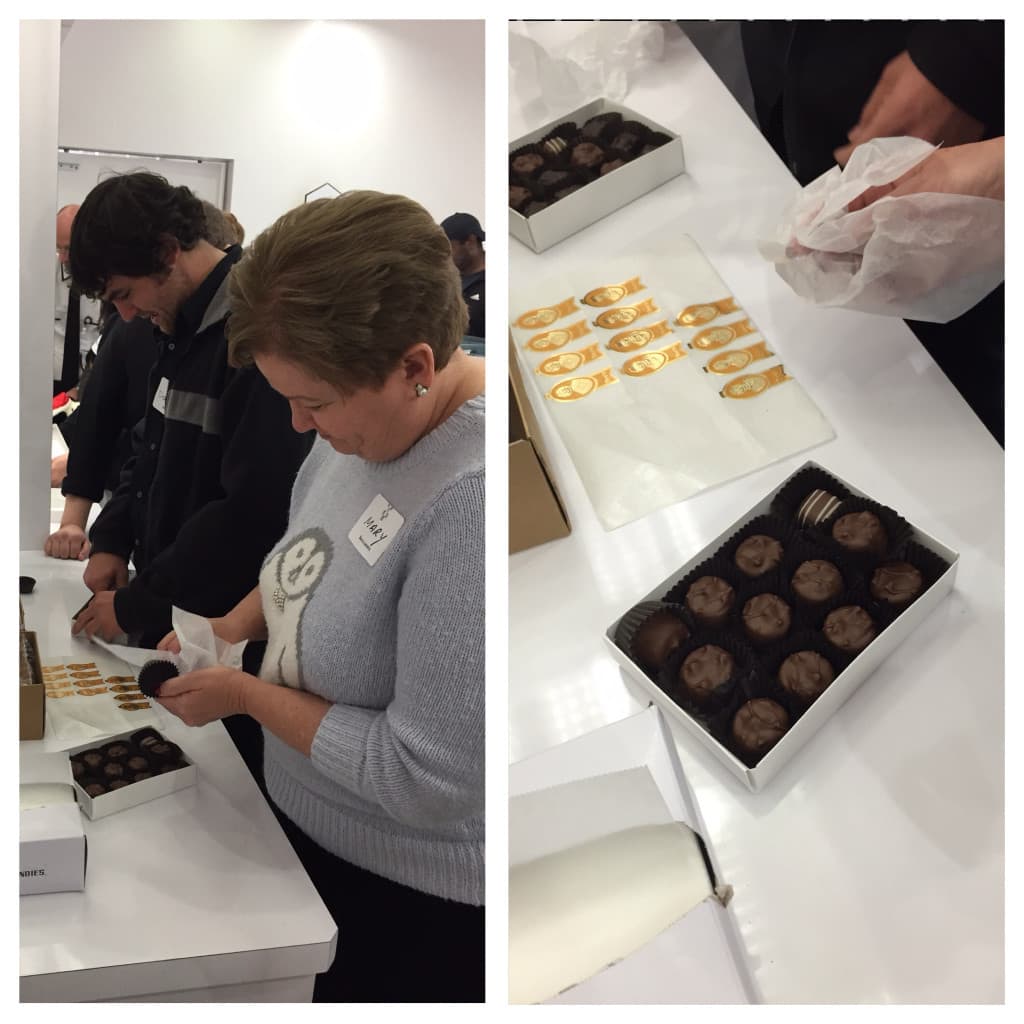 See’s Candies are American made from the finest, freshest ingredients since 1921.  With over 100 choices and free samples for every guest who visit the store, you are deemed to find something sweet to savor.  See’s Candies features five of Mary See’s original chocolate recipes including the Bon Bon, Maple Walnut Cream, Chocolate Walnut Fudge, or Victoria Toffee.

See’s Candies top five best sellers are Bordeaux, Scotchmallow, Almond buds, Pecan buds and California Brittle.  However, my favorite candy is their Milk Patties because you get two in every cup.  I am always up for a good deal! 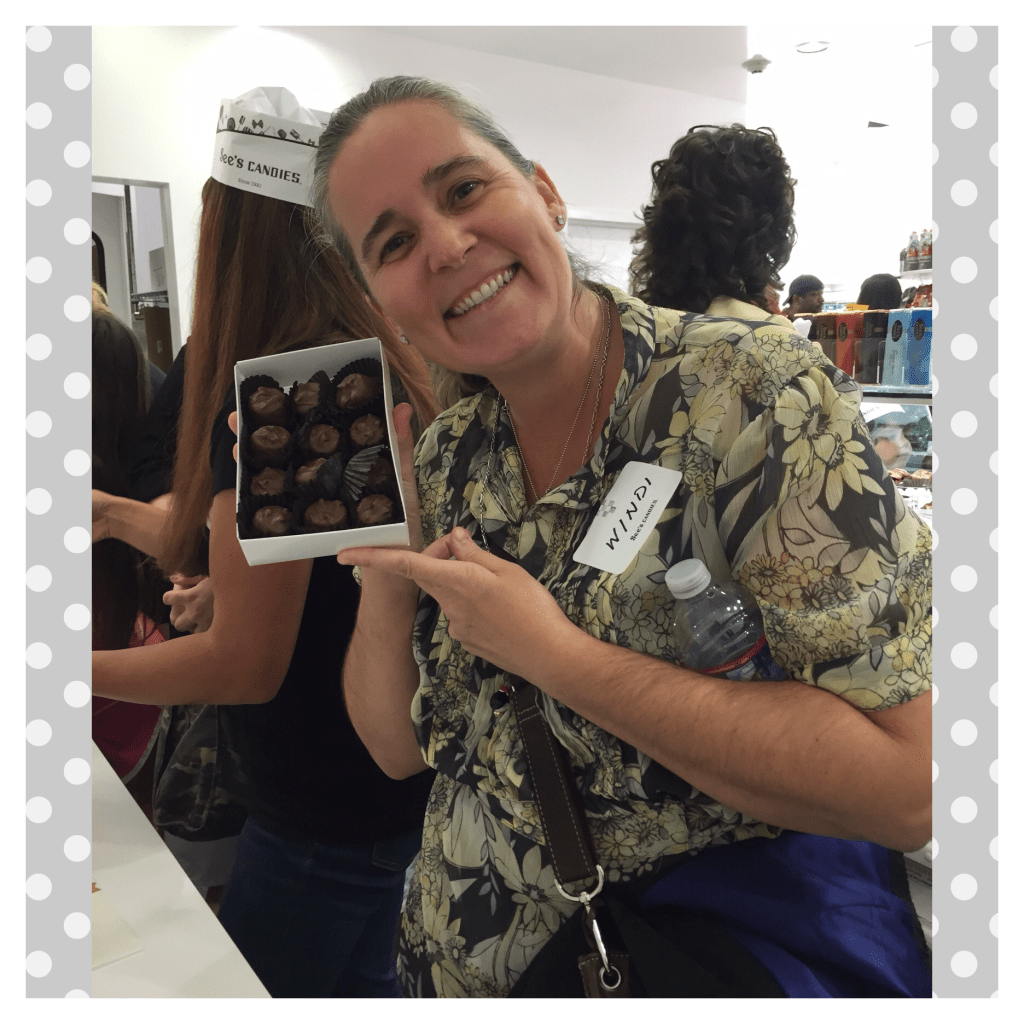 See’s Candies have been a long standing tradition in my family.  We thoroughly enjoy a Bordeaux Egg on Easter, a foil wrapped Turkey on Thanksgiving, and pass around their two-pound box of assorted chocolates on Christmas. 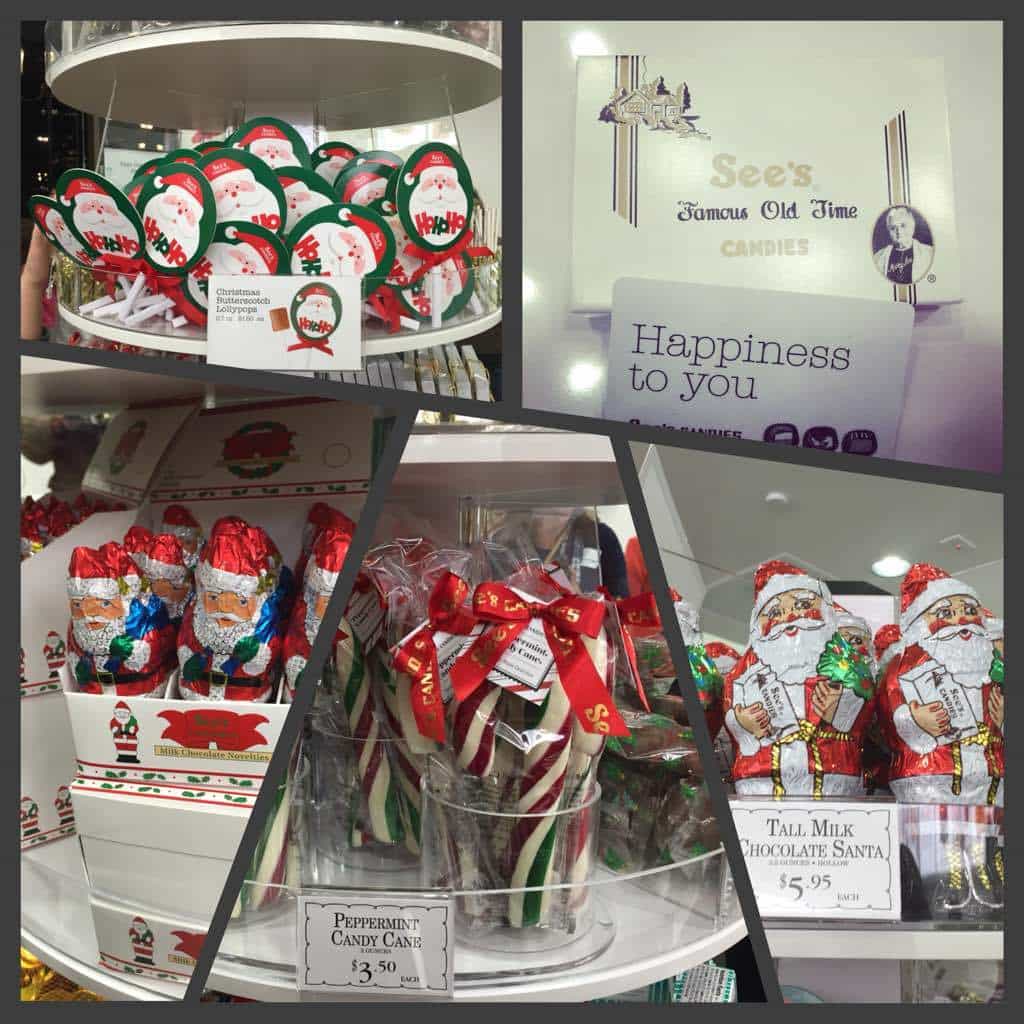 See’s Candies has a variety of pre packaged and cute gifts for the holidays for everyone on your list.  They even have a miniature See’s Candies Box that is included in your gift card purchase.  Do you have family out of state?  See’s Candies is currently offering a $5 flat rate shipping or FREE Shipping on all orders over $65 this holiday season. 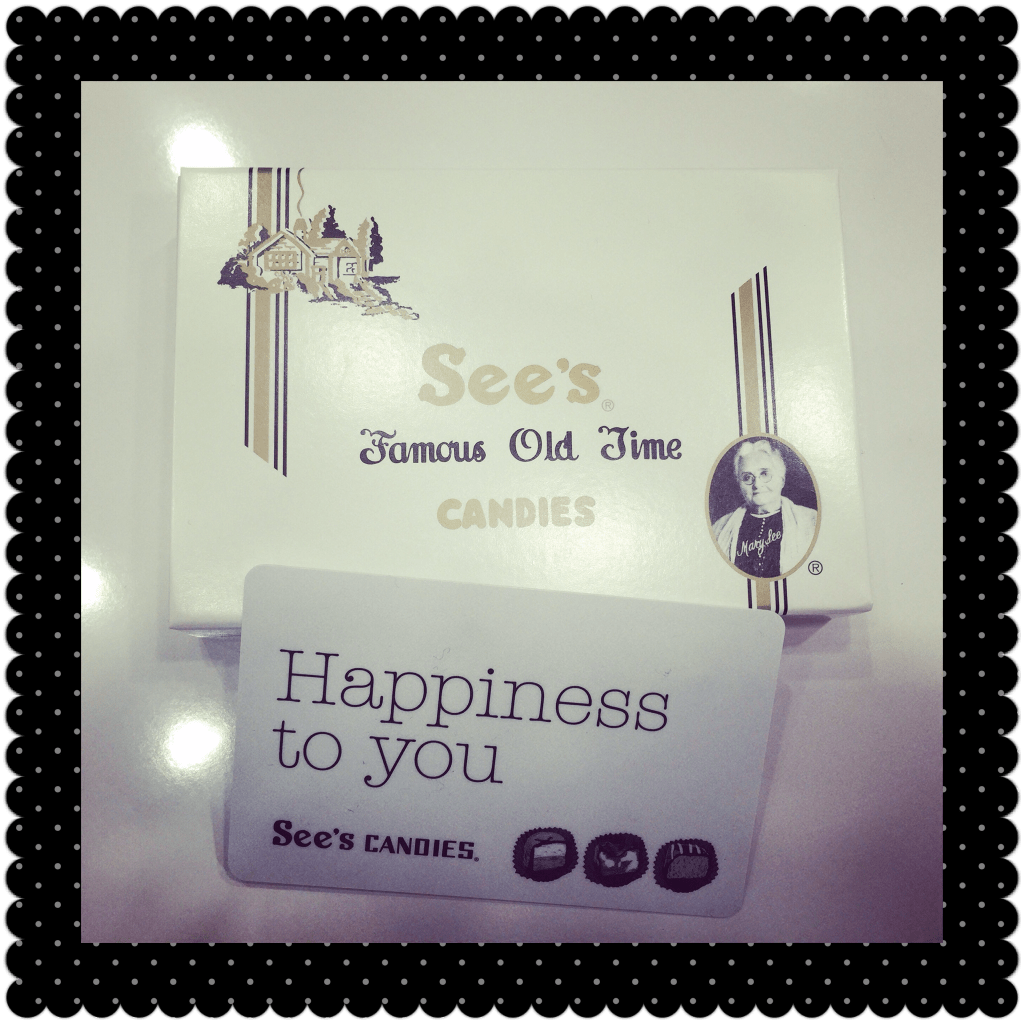 One of my favorite I Love Lucy episodes titled Job Switching was filmed at the See’s Candies factory right here in Southern California.  It is fun to watch Lucy and Ethel make a disaster of the candy production line!  Plus I have always wanted to take a tour of the See’s Candies Factory, but it is no longer open to the public.

Therefore, attending the See’s Candies grand opening and watching the I Love Lucy episode and Huell Howeser’s, California’s Gold episode #908- See’s Candy, will have to do for now!

Join See’s Candies for their Grand Opening Celebration this Friday, November 14th at the new See’s Candies store located by Macy’s between XCVI and Letarte in Fashion Island.

Disclosure:  SoCal Field Trips was invited to a media event by See’s Candies.  All opinions are our own.

When parents go a field trip without their children it is called DATE NIGHT!   Date nights are very important to a couple’s relationship.  They help mom and dad reconnect with one another and spend quality time together without all the distractions of everyday life.

Last Monday night, I had the privilege of attending a blogger event hosted by Eating Around SoCal at Blue C Sushi in Newport Beach.

This was the perfect opportunity for me to scout out a new date night location for my husband, Mr. Socal Field Trips, and I.  Especially since Mr. SoCal Field Trips loves sushi!

From the restaurant’s website, “Blue C Sushi celebrates the innovative designs, trends and pop culture found in modern day Tokyo.  Our restaurants are vibrant, entertaining and interactive.  Our proprietary tracking technology – with an RFID chip embedded in each plate – lets us monitor every item on our delivery belt, tracking how long it’s been on display and alerting the chefs when it’s time to refresh.”

Blue C Sushi in Newport Beach is the restaurant’s third location in California.  Blue C Sushi originally started in Washington state with six restaurants.  Now they have a total of nine locations on the west coast and plans are underway to open their tenth restaurant in Tarzana, CA in the Spring 2015.

Blue C Sushi’s menu offers a vast array of fresh and appetizing entrees.  We sampled a variety of attractive dishes that went around and around the delivery belt as we sat at our table.

Entrees going around the delivery belt.

Blue C Sushi also has a very fun and energetic vibe about it.  Simply watching the chefs prepare the food, and then put it on the delivery belt, was entertainment in and of itself!

Some of the entrees we sampled that night from the delivery belt were:

The spicy edamame was sautéed in garlic, chili and soy sauce.  It was such a rare seasoning combination, that I commented to my friends that it was the best edamame I had ever tasted.

Blue C Sushi’s vegetable tempura was crispy and delightful to the palette.  It reminded me of my time in Japan when I use to sing professionally and travel extensively.  Often times after a concert, I would go out for dinner with friends and order tempura at a local Japanese restaurant.  Blue C Sushi’s tempura is just as good.

Mr. SoCal Field Trip’s favorite Asian dish is udon noodle soup.  For sure, he will be satisfied with Blue C Sushi’s superb version of this classic dish when we visit in the future.

After dinner, we rounded out our meal with dessert.  We savored upon Blue C Sushi’s green tea mocha ice cream and shaved ice with seasonal berries, pineapple, mint with flavored syrup and condensed milk.

All in all, I highly recommend Blue C Sushi as a wonderful place for a date night and to enjoy a delicious Japanese meal with your spouse.

Disclosure: This is not a sponsored post.  We received a complimentary meal from Blue C Sushi for review purposes only.  All points of view, comments and opinions are 100% our own.

THE TASTE OF SOUTH COAST PLAZA

South Coast Plaza in Costa Mesa, CA is famously known as Southern California’s Premier Shopping Center.  People from all over the world travel to South Coast Plaza to shop at some of the world’s most prestigous stores.

However, did you know that South Coast Plaza is also one of the most premier dining centers in Southern California?

South Coast Plaza is home to over forty restaurants and eateries.  They have a large variety of dining options to choose from including Chinese, Japanese, French, American and Italian.

A few years ago, my husband and I lived near South Coast Plaza.  Often times we ate at Champagne Bakery on Sundays and at Maggianos for date night.

Yet after having kids our dining preferences changed and we became frequent patrons of Ruby’s Diner and Corner Bakery.  Basically any restaurant that had a high chair and a kid friendly menu was on the top of our list.

On June 22, I was invited by a fellow blogger named Michael Walsh from Eating Around SoCal to attend The Taste of South Coast Plaza.

The Taste of South Coast Plaza

I also brought my good friend and fellow field tripper, Windi, along to join in on the fun.  Together we got to taste a wide variety of delicious entrees and beverages that were served by a spectacular group of restaurants from South Coast Plaza.

First up, we had to get dressed for the occasion!

Then we strolled between tasting areas as each restaurant staff kindly shared with us what they were offering as a part of the event.

We visited with zcafe first.  Do you know that zcafe was founded by the original owner of zpizza?  The name says it all.  I tried zcafe’s homemade hummus, turkey and Italian sandwiches and freshly baked cookies.

By far, my favorite zcafe selection was the Italian sandwich.  So much so, that I went back for seconds.

After zcafe, Windi went over to visit with Vie de France’s friendly staff.  She said Vie de France is her favorite restaurant in the mall and thoroughly enjoyed their cheddar bisquit and buttery crossiants.

Next, I ventured over Scott’s Restaurant and Bar.  There I met with Executive Chef Michael Doctulero and got to hear about how he uses products from local farms and sustainable fisheries to make their entrees.  On this specific occasion, Chef Doctulero served a freshly prepared organic spinach salad with pine nuts.

Morton’s The Steakhouse served a braised beef short rib slider with sour cream and chives.  My husband told me later that Morton’s also makes a great hamburger.  i never would have thought of that.  I will have to try it sometime.

Windi and I both thought Seasons 52 Fresh Grill served the best beverage of the day – a classic ice tea sweetened with a hint of all natural sweetener.  It was truly divine!  They also served some yummy deserts including a double crusted New York style mango cheesecake and mini key lime pie.

Lawry’s Carvery offered patrons a taste of their original hand-carved prime rib sandwich and creamed corn.  Personally, Lawry’s is one of my favorite restaurants at South Coast Plaza.

To top it off, Windi and I savored a sample of Godiva’s Chocolate Banana Smoothie and Blueberry Pomegranate Smoothie truffles.  Godiva’s Smoothie Truffles are only available through the summer.

Disclosure: This is not a sponsored post.  We were invited to the event for review purposes only.  All opinions are our own.  Images used by permission.