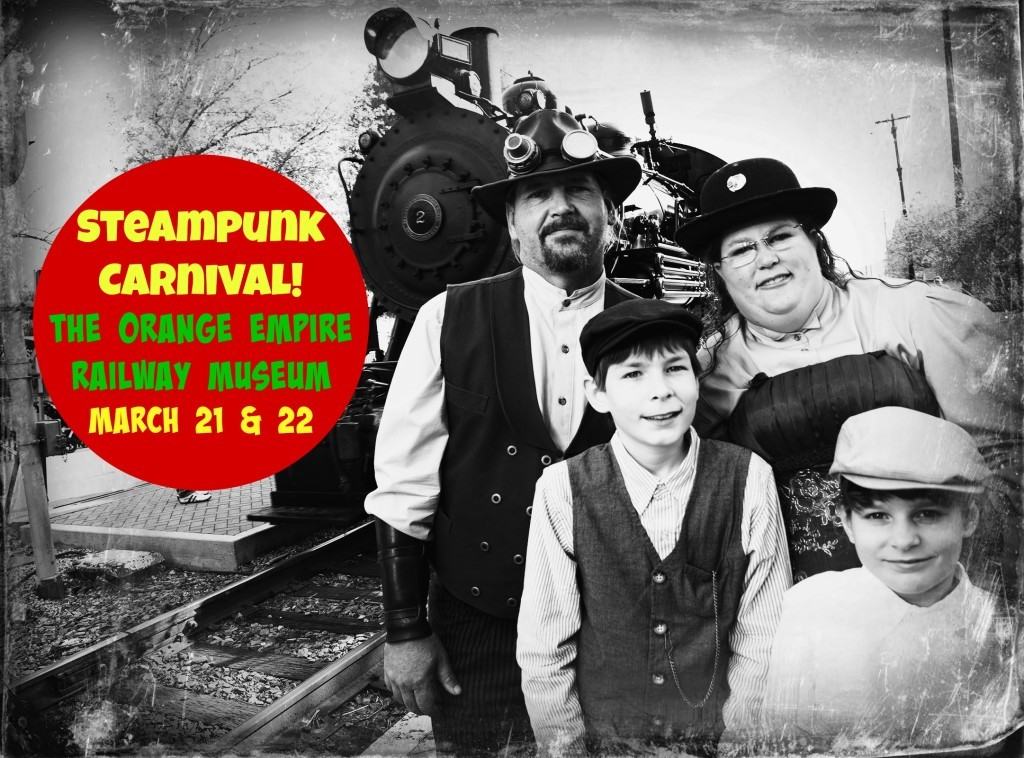 Bring friends and the entire family to celebrate the fantasy, history and ingenuity behind Steampunk on March 21 and 22 at the Orange Empire Railway Museum.

The Iron Horse/Family Steampunk Carnivale celebrates the future of the past.  It pays homage to the Victorian Era, Edwardian science fiction and the Industrial Revolution with a real, live steam-powered locomotive being the perfect backdrop.

According to Wikipedia, “Steampunk began as a subgenre of science fiction and fantasy literature, but has developed in recent years to become a craft and lifestyle movement that commonly features some aspect of steam-powered machinery.  Although its literary origins are sometimes associated with cyberpunk, steampunk is often inspired by industrialized Western civilization during the 19th century.

At the Iron Horse/Family Steampunk Carnivale enjoy the quirky Victorian-flavored hip hop of Poplock Holmes and the magical medicine show of Dr. Solar.  At an evening concert, experience the mesh of mime and music of Steam Powered Giraffe.

Other activities and displays include:

WHERE: The Orange Empire Railway Museum is located 2201 S A St., Perris, CA

Now for a flash giveaway!  Enter to win a family 4-pack of tickets to attend The Iron Horse/Family Steampunk Carnivale on either day of your choosing (evening concert not included)!  The winner will be selected on March 15!

For more information about the Steampunk Carnivale, please visit www.oerm.org

Disclosure: This post is for informational purposes only.  All points of view are my own.  Photo copyrighted by The Orange Empire Railway Museum and used by permission.

It would be fun to go to the SteamPunk Carnival at The Orange Empire Railroad Museum with my family. Thank You for this GiveAway! ♡

I want to win this because my son and husband are train fanatics and would love this!

My daughter would love this event! She loves steampunk!

I would live to share this with my two boys.