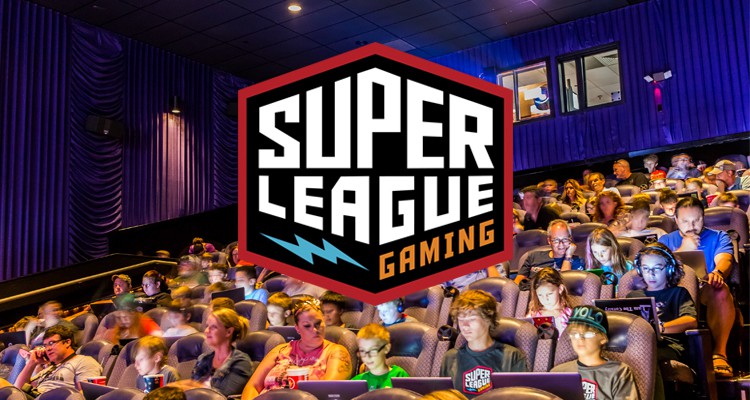 If your household is anything like ours, your day is divided into two parts – the part where your kids play Minecraft and the other part where they talk about playing Minecraft!

As you can imagine, it was with great enthusiasm and a small bit of trepidation, that in April we arrived at the Century 20 Theater in Huntington Beach to take our first step into the world of Minecraft Super League Gaming.  Super League Gaming is a team based Minecraft competition for kids that is hosted in a local movie theaters in 30 states across the country.  Kids bring their own laptops to compete against one another and watch the  progress of the game up on the big screen!

At first my youngest son, Hudson, was a little nervous at joining in.  He doesn’t like competition too much and prefers to build in Minecraft instead.  But as soon as he booted up his laptop all his concerns were forgotten and he was off and running.

Each gaming session consists of several different types of games to put the teams through their paces, including a straight building portion, which Hudson loved.  The theme for this year’s Super League was “Superheroes”.

Each team was given a certain amount of time to build a superhero lair.  Then all of the participants across the country voted on which one was their favorite.  Other games included a capture the flag style session and a rather clever Minecraft version of Pictionary.   There were even a few games I didn’t quite understand, although I seemed to be the only one!

Both of my boys tend to be rather shy, especially when meeting a large group of people.  However, I was pleasantly surprised that during the gaming session both of them got up and moved over and joined the other members on their respective teams.  That’s a huge success in my book!

Our particular Super League Gaming session lasted for 4 weeks.  By the end of our 4th session, both of my boys were asking if they could sign up for the summer session!

That pretty much sums up what they thought about Super League Gaming.  However, they wanted to speak for themselves, so here’s a little video they put together just for you!

To register your child for an upcoming Super League Gaming event, please visit www.superleague.com where you will find a list of dates and locations near you.