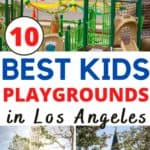 Nothing’s better than taking our children to the park to let them have fun and burn off some pent-up energy, right? With beautiful, sunny skies and warm temps almost daily, a trip to the park can become a daily activity. To prevent boredom from setting in from the same old routine of going to the same old park everyday, Los Angeles offers an amazing variety of outdoor playgrounds for children to explore while we enjoy some shade and relaxation (if the young ones allow that)!

Here’s a look at 10 of the best children’s playgrounds in Los Angeles and the surrounding areas.

A universally accessible playground, Aidan’s Place at Westwood Center offers an array of fun for children. With swings, slides, and climbing attractions, Aidan’s Place also includes an airplane where children can be their own pilot. They’ll have a blast playing in the covered sand area. Aidan’s Place opened in 2001.

Children can fulfill their dreams of becoming fire fighters with a visit to Costanso Fire Station 84 Park. With playground equipment resembling a fire truck, children will enjoy themselves climbing around the universally accessible truck, as well as playing on the slides. The attraction also features ladders for children to climb, as well as interactive exhibits, such as a spinning wheel.

Opened in Griffith Park in 2019, Vermont Canyon Play Area quickly caught on in popularity. With an impressive view of the valley, as well as the Griffith Observatory, the fenced-in play area features swings, slides, safe rope obstacles, and more for children. Vermont Canyon is easily accessible and includes picnic tables, perfect for a picnic lunch at the park.

It’s a park. And an island. Children of all ages will have fun exploring Heritage Park island, where you can explore the building, as well as play on the equipment inside. From slides to a pirate ship, they’re sure to have a great time. Bring some bird seed along, so everyone can help feed the ducks and geese in the pond.

El Sereno Arroyo Playground in East Los Angeles offers about 4,000 square feet of playground for children to explore and play. Featuring slides, bridges, and merry-go-round, El Sereno Arroyo is a fun spot families. With a nature play area, children can run around, play tag or ball, while the adults relax and watch from benches or picnic tables. The park also features a nature trail and art mosaics.

Named as one of the best places to host a birthday party, Polliwog Park in Manhattan Beach is a beautiful park to visit. With a play area that features a lighthouse, spiral tube slide, sand box, and climbing areas, Polliwog Park has something for everyone. Bring binoculars and a camera, as the area is perfect for bird watching.

Featuring a jungle theme, Westside Neighborhood Park is a universally accessible playground targeted for children 5-12, with slides, climbing rocks, and a glider. With a sensory wall that transitions from a tree to animals, such as an elephant and leopard, children can climb them. They can also climb the small rocks. The play area also features an accessible sand play area. Westside Neighborhood Park includes an outdoor basketball court.

Los Angeles’ original universally accessible park named Shane’s Inspiration located at Griffith Park in Hollywood opened in 2000. The park features a series of attractions, including a plane and space shuttle replica, where children can test their pilot skills. Each attraction features a slide. Try your hand at being a sea captain on a small pirate ship. Make a day of it, and bring a lunch to enjoy at the picnic tables.

Children can run their train along the California railroad without ever leaving Hunter Hobby Park in Riverside. With playground equipment resembling a train, with a locomotive and caboose featuring a slide, your child may want to get their own engineer’s cap and spend the day at the park.

Whether it’s your standard neighborhood park with swings and slides or a universally accessible park open for everyone, Los Angeles has some of the best children’s playgrounds in the country, and they’re waiting for you to visit for a fun time. Your children will love it, and you’ll enjoy watching them burn off that excess energy.