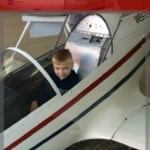 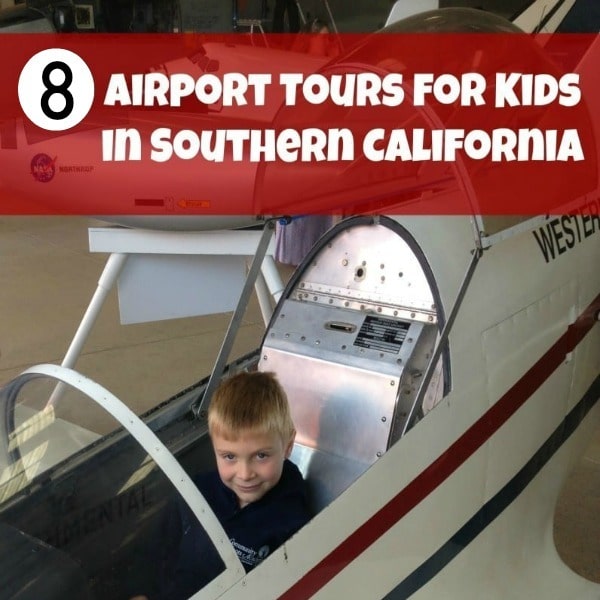 One of my favorite aspects of planning field trips is finding unique places to visit in Southern California.  Taking a field trip to your local airport is one of them!

Spending time at your local airport is an educational and fun way to watch what happens at the airport. This works best at airports that are not extremely busy, although that depends on the age and temperament of your children.

What You Learn On An Airport Tour

Most airports prefer to offer tours in the morning, but not all.   Take the airport shuttle, train, or other public transport and save yourself the hassle of driving and parking.  This is as much a part of the learning experience as the visit itself.  Depending on your children’s interests and where you are observing from, there are a variety of things you will see.

There are 8 airport tours for kids in Southern California. 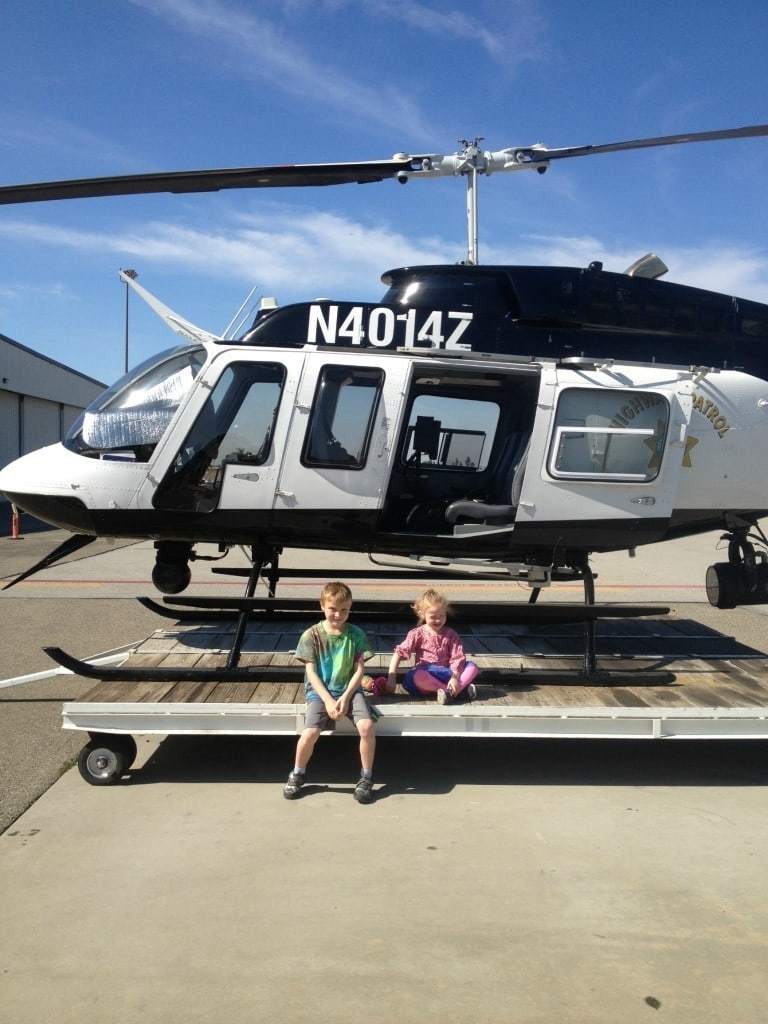 The Fullerton Airport is the only general aviation airport in Orange County.  It is located three miles from Knott’s Berry Farm and six miles from Disneyland.  The airport is completely self-supporting and operates on an open air field.

I led a field trip to the Fullerton Airport back in 2014 and it was by far, the best airport tour we have ever been on.  The volunteers were kind and very knowledgable about their craft.  We even got to meet a CHP helicopter pilot at The California Highway Patrol Metro Squadron hanger! 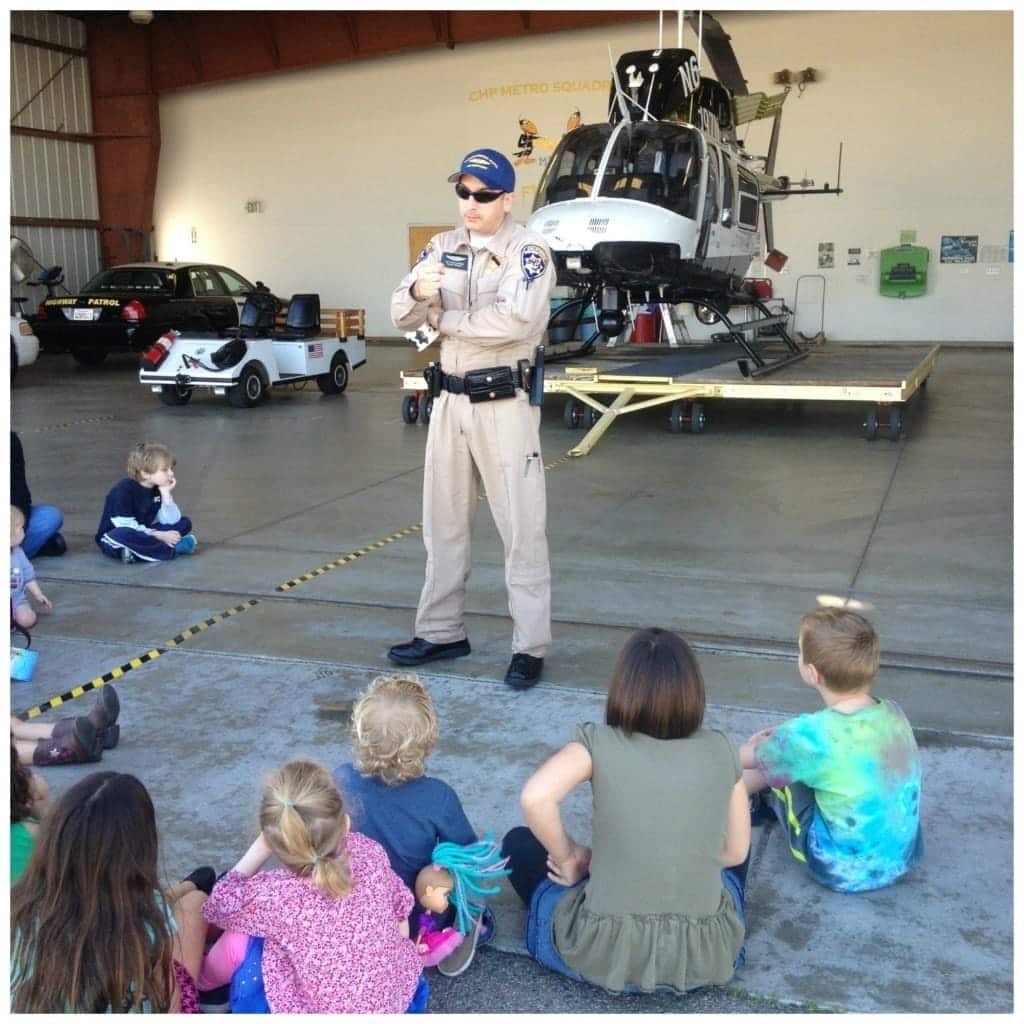 The Fullerton Airport offers FREE tours for public schools located within the Fullerton Unified School District.  Tours for all other groups is $4 per person.  To book your own tour, please call (714) 738-6323.

The Van Nuys Airport offers a FREE award-winning educational and tour program.  The tour gives visitors a close-up look at a wide variety of aircraft and a glimpse into the many activities of aviation companies and operations at VNY.  Visitors also learn about VNY’s contributions in providing vital community services and its rich and colorful history – such as its use over the years as a frequent backdrop for Hollywood films and television shows.

For the youngest visitors, a special feature of the tours involves a visit to “Vinny,” the airport’s colorful mascot and Southern California’s first kid-friendly educational airplane.  Designed to be airborne, Vinny is accessible as a hands-on experience for children. 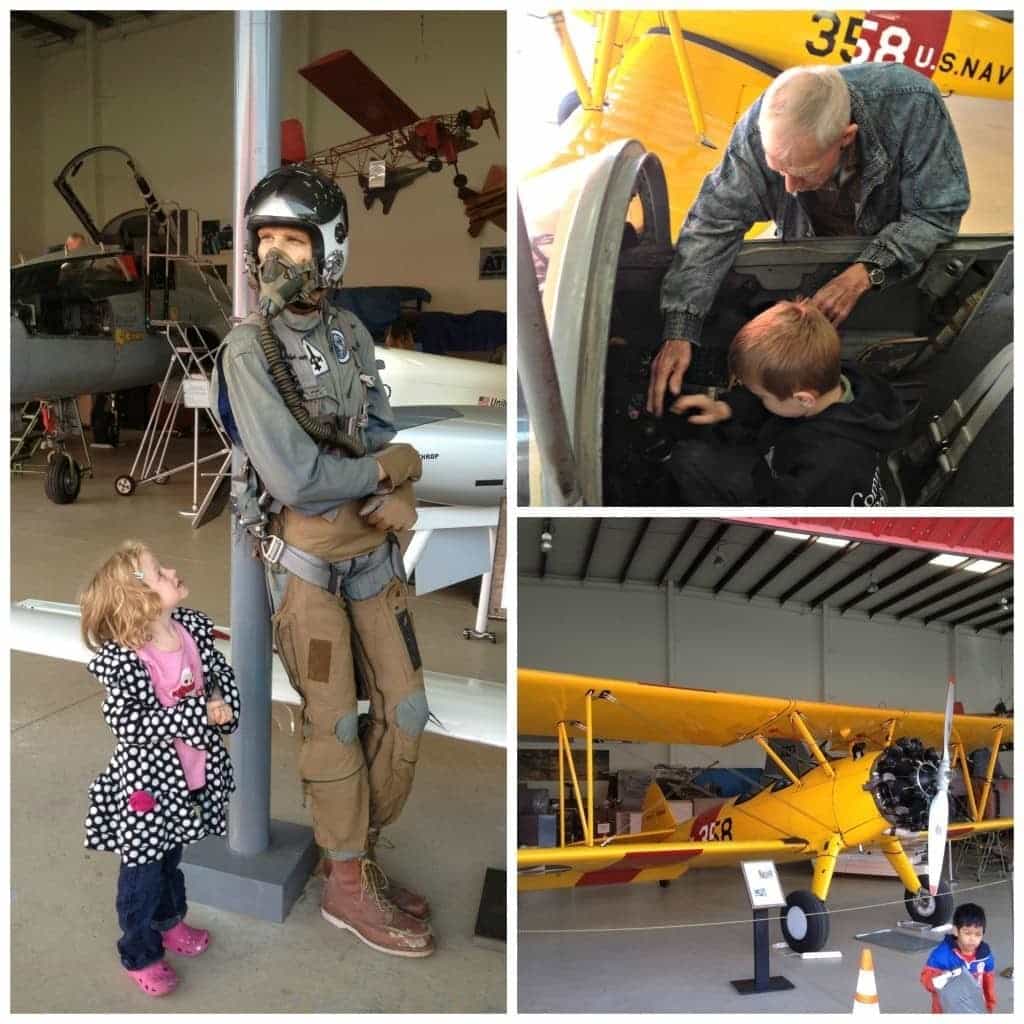 The Western Museum of Flight is a non-profit, educational institution dedicated to preserving and displaying aircraft history and artifacts of Southern California’s aviation heritage.  The Air Museum’s educational programs give children an opportunity to see and touch the airplanes that made aviation history and take an inside look at completed and in-progress aircraft restoration projects.  The Western Museum of Flight’s collection includes numerous Warbirds, aircraft and target drones, piston and jet aircraft engines, aircraft components, aircraft ejection seats, World War II instruments, aircrew accessories, and an extensive model aircraft collection.

When we visited, not only did we get to see a variety of airplanes, but we got to sit in them too!  This was the highlight of our visit.

The Western Museum of Flight is technically not an airport, but if you go on just the right day, their volunteers might take you out to look at the airplanes on Torrance Airport’s air strip.

Long Beach Airport offers guests a behind the scenes glimpse of aviation operations, aviation history, classic architecture and mosaic artwork.  The tour is available FREE to groups ages eight and up with advanced reservations.

A unique feature includes the facility’s art and architecture.  Long Beach Airport possesses one of the few historic terminal buildings in the U.S. that remains in operation.

Airport tours, which can vary depending on the status of daily operations, include the terminal, fire and rescue, and a walk through the historic exhibit which pays tribute to many of Long Beach’s aviation legends.   For reservations, contact Public Affairs at 562-570-2678. 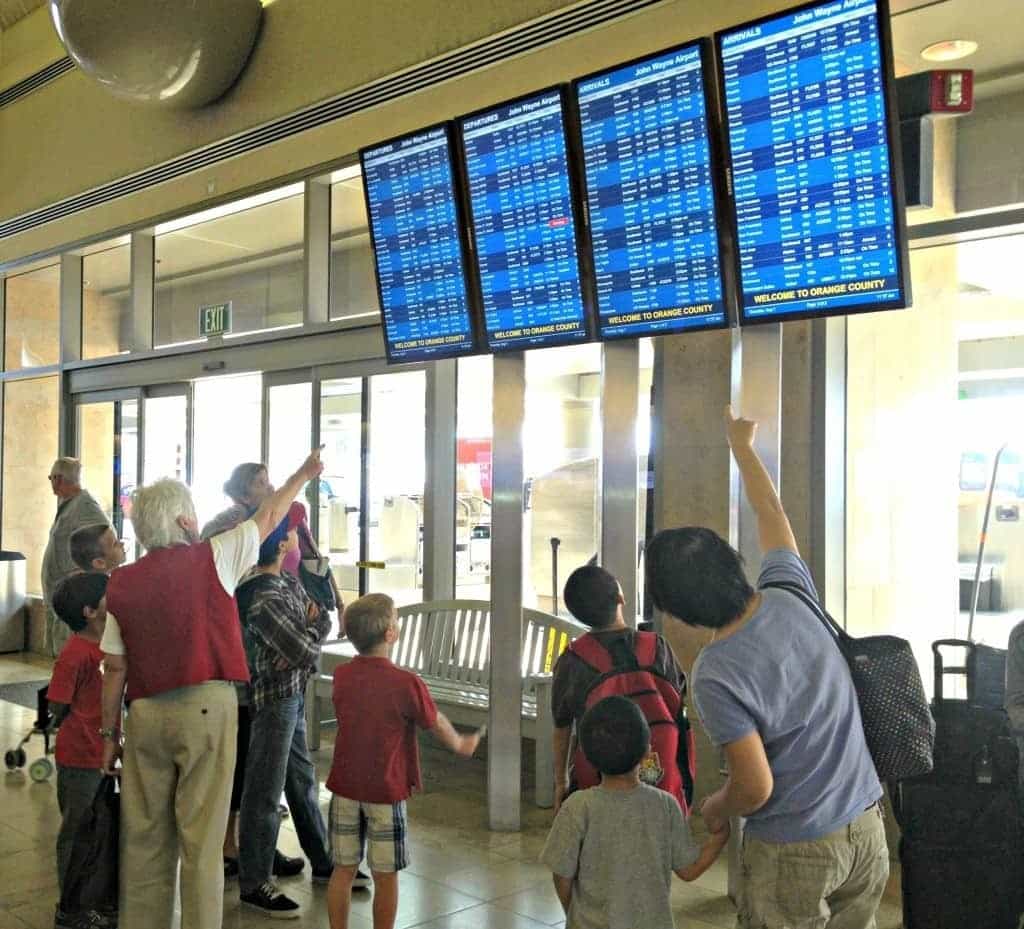 Guided tours of the Thomas F. Riley Terminal are offered, FREE of charge, as a part of the John Wayne Airport Public Affairs Program.

Tours begin at the John Wayne statue on the Arrival Lower Level.  Groups view and receive explanations of how planes fly, the Wright Brothers flight, terminal architecture, historical photo displays, rental car areas, baggage carousels, airline ticket counter areas, security checkpoints, flight display monitors, paging, and skycap activity.  The last stop on the tour is an area where the participants can view the airfield and planes taking off and landing. 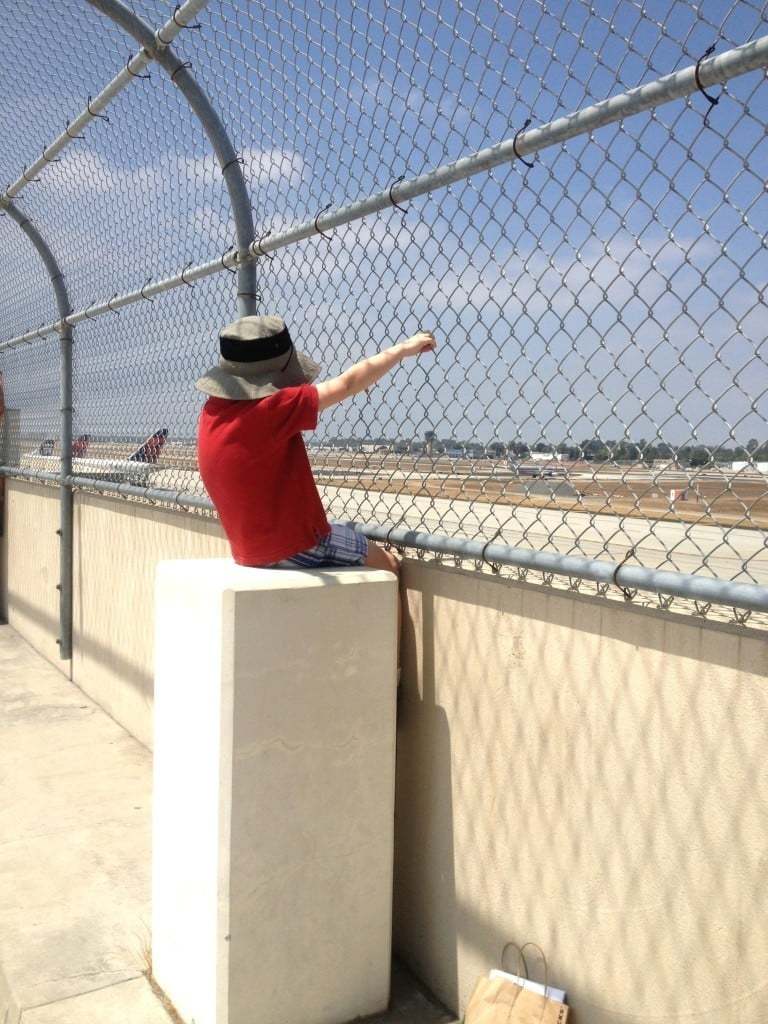 Tours are scheduled in advance at non-peak traffic hours, usually between 10:30 a.m. or 2:30 p.m., Monday through Friday.  Saturday tours can also be arranged.   The tour lasts between 1 to 1-1/2 hours.   A “Fun Guide,” with educational pages and games, is available free of charge to youngsters.

Children must be at least five years old and/or in first grade and accompanied by an appropriate number of adult chaperones.  High School and college tours may be arranged with aviation career speakers provided. 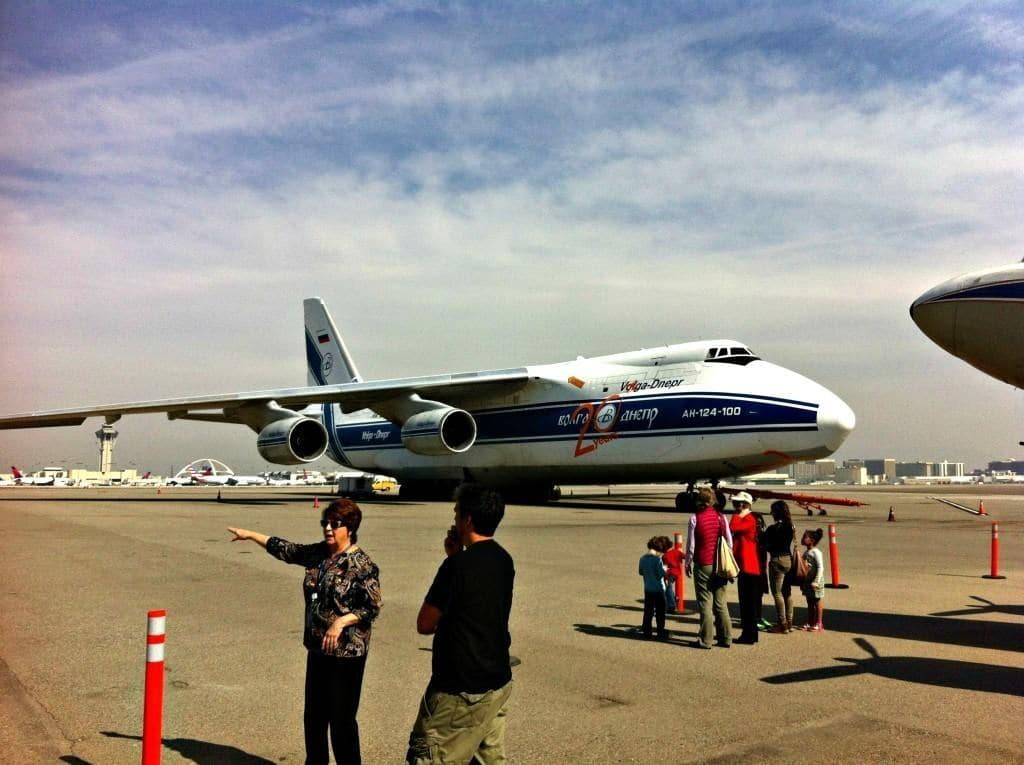 Los Angeles World Airports’ Community Relations Division offers FREE tours every Tuesday and Thursday at 10:00 am for 2nd grade students and above at the Flight Path Learning Center Museum.  Students have the opportunity to tour the museum which features a panoramic mural saluting the 100th anniversary of flight and includes authentic historic photographs from Southern California’s formative years of aviation through the 21st Century.

Other exhibits include models, photographs, uniforms and other artifacts highlighting the role of airlines, aircraft manufacturers, and aerospace companies that influenced the history of Southern California. 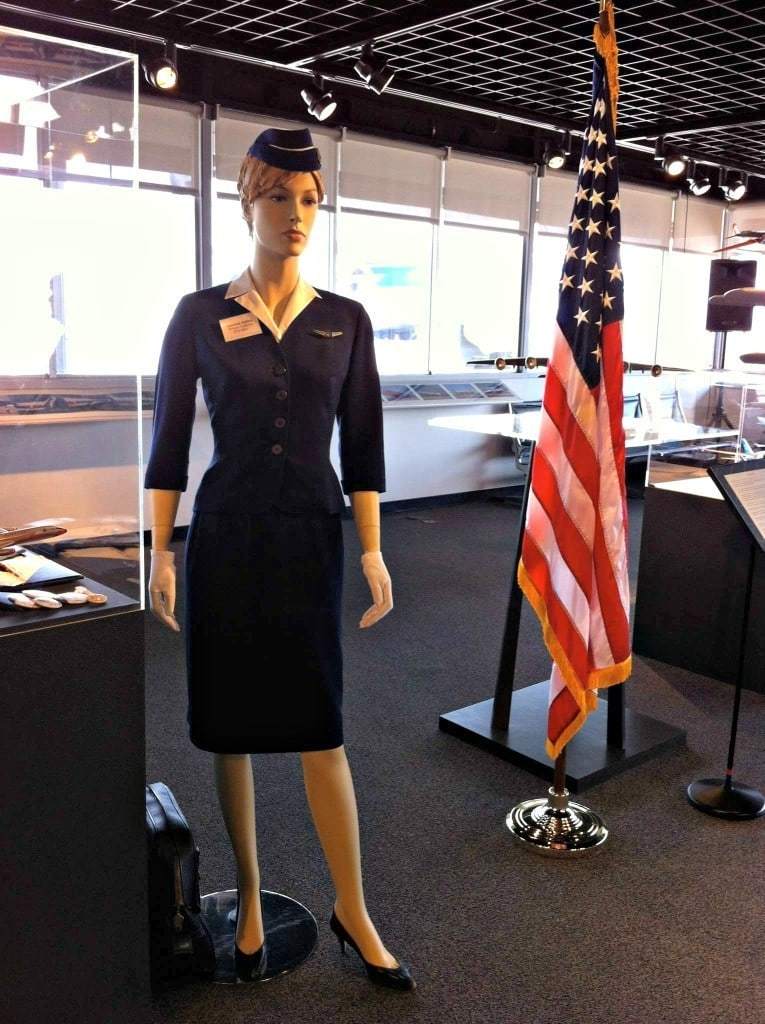 Tours also include a live broadcast of air traffic controllers from the FAA tower.  And depending on availability, special presentations are made by LAX’s K-9 Bomb Detection Unit and Fire Department.  Our group REALLY enjoyed the K-9 dog presentation!  For more information, call (424) 646-7284.

The San Diego International Airport Authority offers a FREE tour called Terminals To Tarmac.  The tour is of the airport and airfield, including up-close looks at the runway, endangered species areas and public art.  Tours are two hours long and are offered every other week on Thursday at 1 p.m. and Friday at 10 a.m. 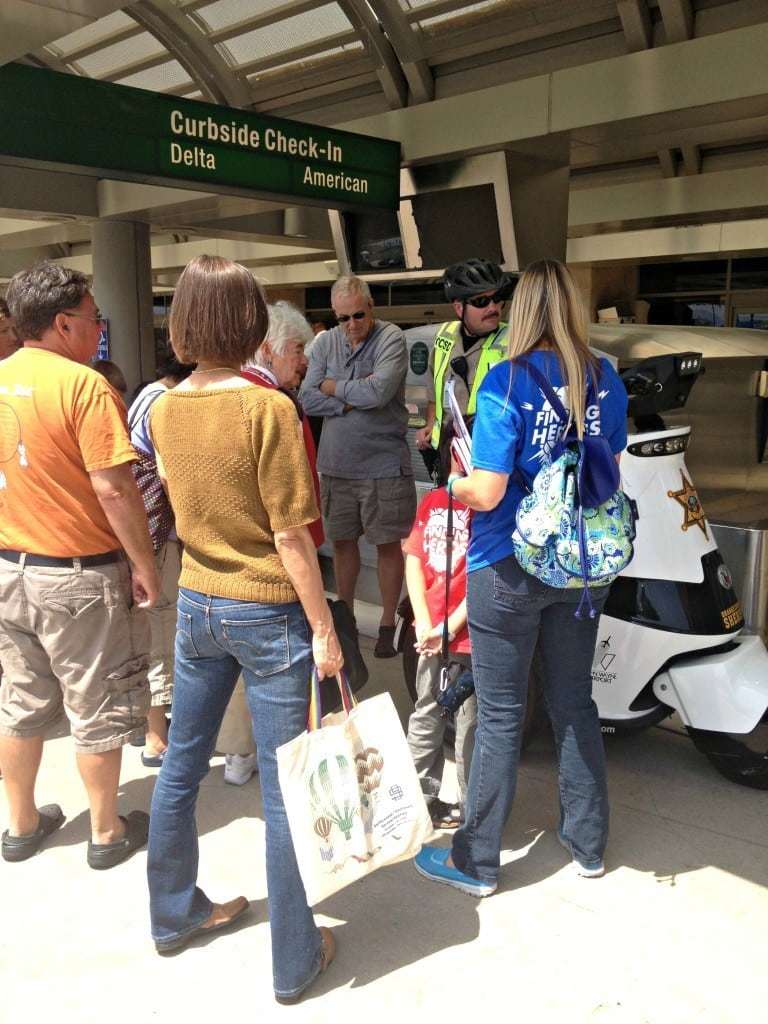 Santa Barbara Airport tours are FREE and are booked on a first come, first serve basis.  Tours are available Tuesday, Wednesday, and Thursday, between the hours of 9 am and 4 pm.  Tours designed to be age appropriate.  The Visitors Center also features hands-on aviation exhibits for kids of all ages.  To book a tour call (805) 964-7622.

More Things To Do With Kids in Southern California

40 LA Museums To Explore With Kids

60+ Places To Explore With Kids in Orange County

Where To Go Whale Watching in California - SoCal Field Trips