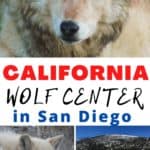 Early this fall, I took my kids to visit the California Wolf Center in Julian, California. Open to the public year round, the center educates the public about the importance of wolves in our ecosystem and uses it facility to reintroduce wolves back into their natural habitat.

The California Wolf Center’s goal is to foster communities coming together to ensure wolves, livestock, and people thrive in today’s world, which they accomplish through conservation, education, and research.

While on the private tour, we learned several interesting facts about wolves. First, wolves weigh up to 75 to 110 lbs. They live approximately 5 to 7 yrs. in the wild and 12 to 15 yrs. in captivity.

Overall, wolves are larger than coyotes and have larger paws which helps them walk on snow and dig dens. But wolves and coyotes’ teeth and the shape of their skulls are similar.

Wolves can eat up 15 to 20 lbs of meat in one sitting compared to humans who eat 3 to 4 lbs of meat a day. Wolves also fill up their bellies in case they don’t see prey again for awhile.

The wolf packs that we met on display are for educational purposes only, because they can not be released back into the wild.

However, they several other packs on campus that are specifically raised to be released back out into the wild. The center partners with other wolf sanctuaries around the United States and Canada to coordinate when and where to release the wolves.

Today, the California Wolf Center releases Mexican Wolves into Arizona and Mexico. Here’s an interesting fact…while at the center, the Mexican Wolves are not fed live prey so they don’t learn to attack live animals on ranches.

My favorite part of the tour was meeting the wolves up close and personal. While we couldn’t pet them, we were able to observe them playing and chasing one another. One wolf even got close enough that he titled his head and look curious to find out who were these complete strangers staring back at him.

Our tour guide was fantastic and had such a wealth of knowledge about wolves to share with our group. After the tour was over, we went into the center’s store to check out their souvenirs and educational materials. I picked up a postcard or two to send to my family members. They also have a second store in downtown Julian.

Book at Tour of the California Wolf Center in Julian

To learn more about the lives of wolves and how the California Wolf Center helps this critically endangered species, you can schedule a 1-hour in depth tour of the sanctuary. They offer tours seven days a week, year round to the public. Learn more by visiting californiawolfcenter.org.