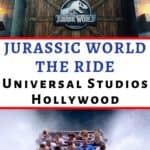 Jurassic World – The Ride is now open at Universal Studios Hollywood!  Last weekend, SoCal Field Trips had the opportunity to be one of the first guests to take the plunge into this new land of mystery and discovery and lived to tell about it.  The original Jurassic Park – The Ride, which operated from 1996 t0 2018, has undergone some major rennovations and reopened as Jurassic World – The Ride this past July.

The creators have added several new effects to the already superb ride including new music, a whole new blue and gray color scheme and an enormous replica of a vast aquarium.  Jurassic World – The Ride also stars several actors from the “Jurassic World” films including Chris Pratt, Bryce Dallas Howard and BD Wong.

Once we stepped on board the life raft on Jurassic World – The Ride, my kids and I made our journey down a long stream into the abyss.  Along the route, there was a plethra of hanging vines and a dinosaur skeleton with the words “When dinosaurs ruled the earth” on it.

As the gigantic gates opened to Jurassic World, the movie’s theme song swelled over the loud speakers, and a deep voice hailed “Welcome to Jurassic Park”.  As I squealed in fear, my son tried to reassure me that everything would okay.  But if you know me, you know I’m a big chicken!  Once inside the gates, we caught our first glimpse of the dinosaurs.  The way the large, long-necked dinosaurs stared down at me made me feel quite small and vulnerable. 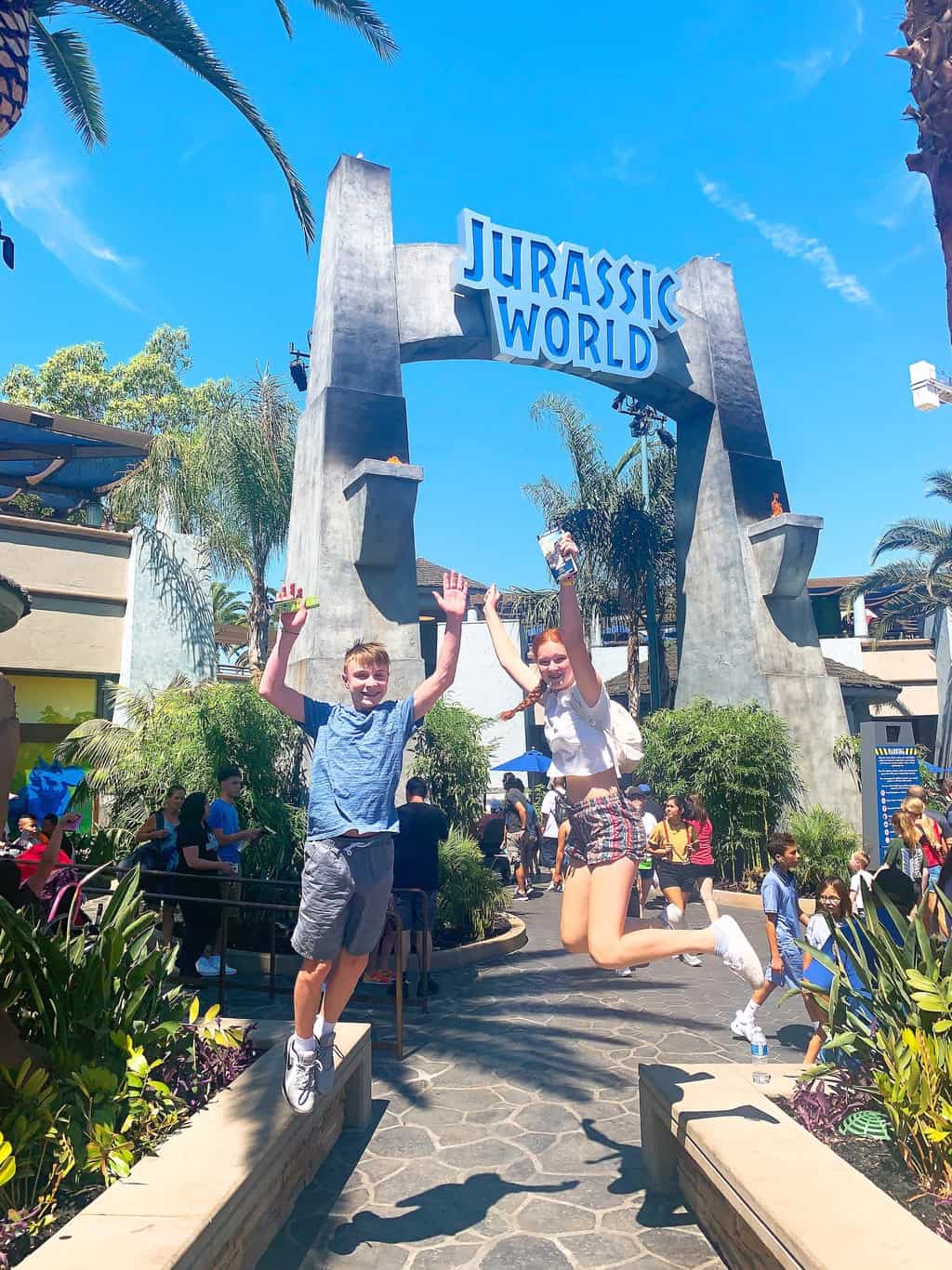 Then, as a second set of sturdy metal doors opened wide, we entered a virtual aquarium.  While we sat in the raft and glided along the water, a huge Mosasaurus suddenly came out of no where and swam underneath the boat and splashed everyone.  So, if you don’t like to get wet, I highly recommend that you wear a poncho on this ride. 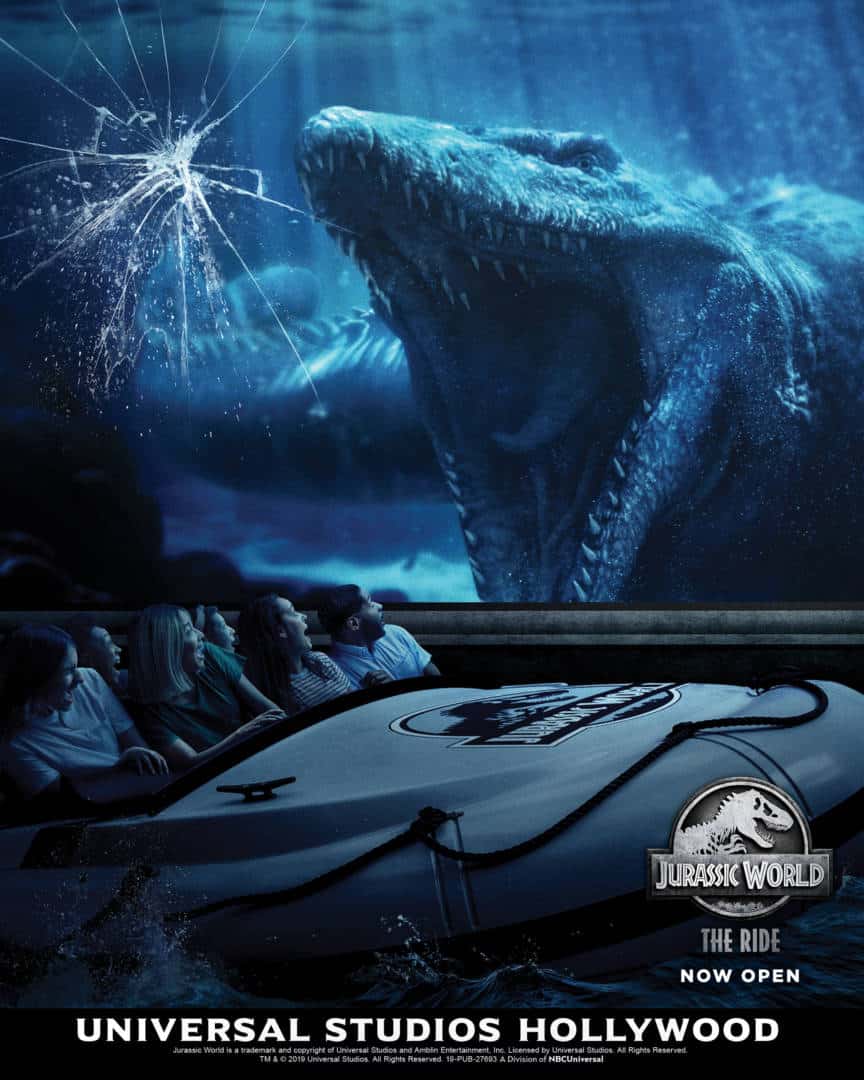 After the aquarium, we passed underneath a waterfall and went through a tunnel carved out of rock.  Various non-threatening dinosarus greeted us warmly as geysers exploded water into the air.  As we entered the heavily fortified Predator Cove, we saw the doors to the Indominus Rex pen exploded off and electric cables fizzling about.  That’s when I heard a frantic voice calling out “danger ahead”!  Now I was really shaking in my boots!

As the voice continued to warn passengers not to enter, the boat ascended a steep ramp covered in cascading water.  A few short moments later the raft made a quick drop into a darkened corridor.  In all reality, the drop wasn’t too bad.  Even a scaredy cat like me could handle it!

After the first drop, we went through another wide industrial tunnel and watched Chris Pratt on a series of TVs from up above plead with us to remain calm while keeping our hands and arms inside the boat.  I held my breath as roaring dinosaurs of all sizes emerged from the darkness and spit water on us.

Then, just as we were about to head up the second ramp to take another plunge, an Indominus Rex lunged toward us and I screamed in fear.  My screams echoed throughout the chamber as the boat plummeted down the ramp and into the perilous waters below.  We were now soaked head to toe! 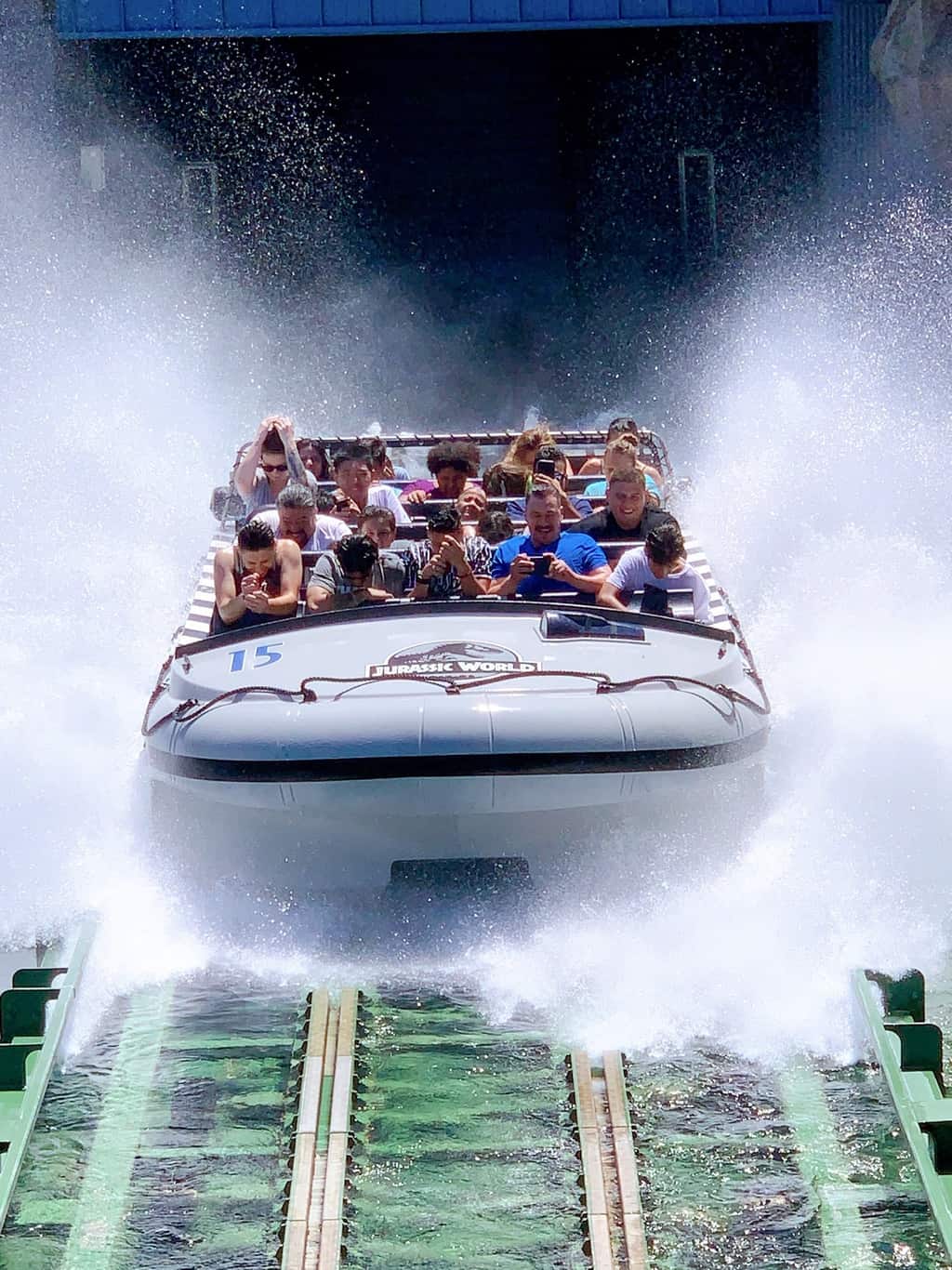 All in all, Jurassic World – The Ride provides thrill seekers with everything they liked about the original ride, along with several new updates and clever effects.

In additional to Jurassic World – The Ride, there are a few other dinosaur-inspired areas to explore at Universal Studios Hollywood.  Over at the Raptor Encounter, visitors can meet Blue the Velociraptor (the most beloved Velociraptor from the Jurassic World franchise), a big friendly Triceratops and a new little Baby Raptor! 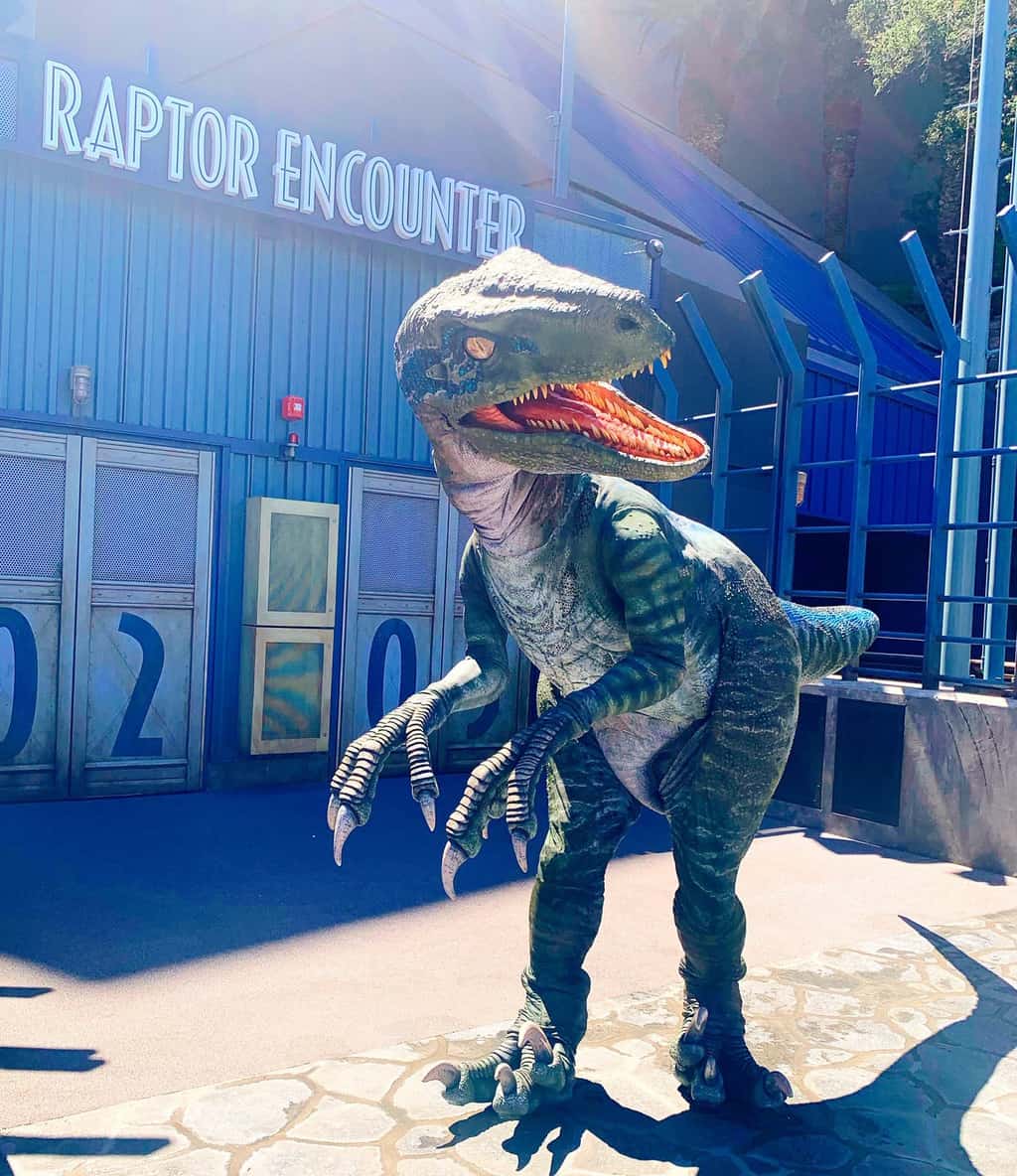 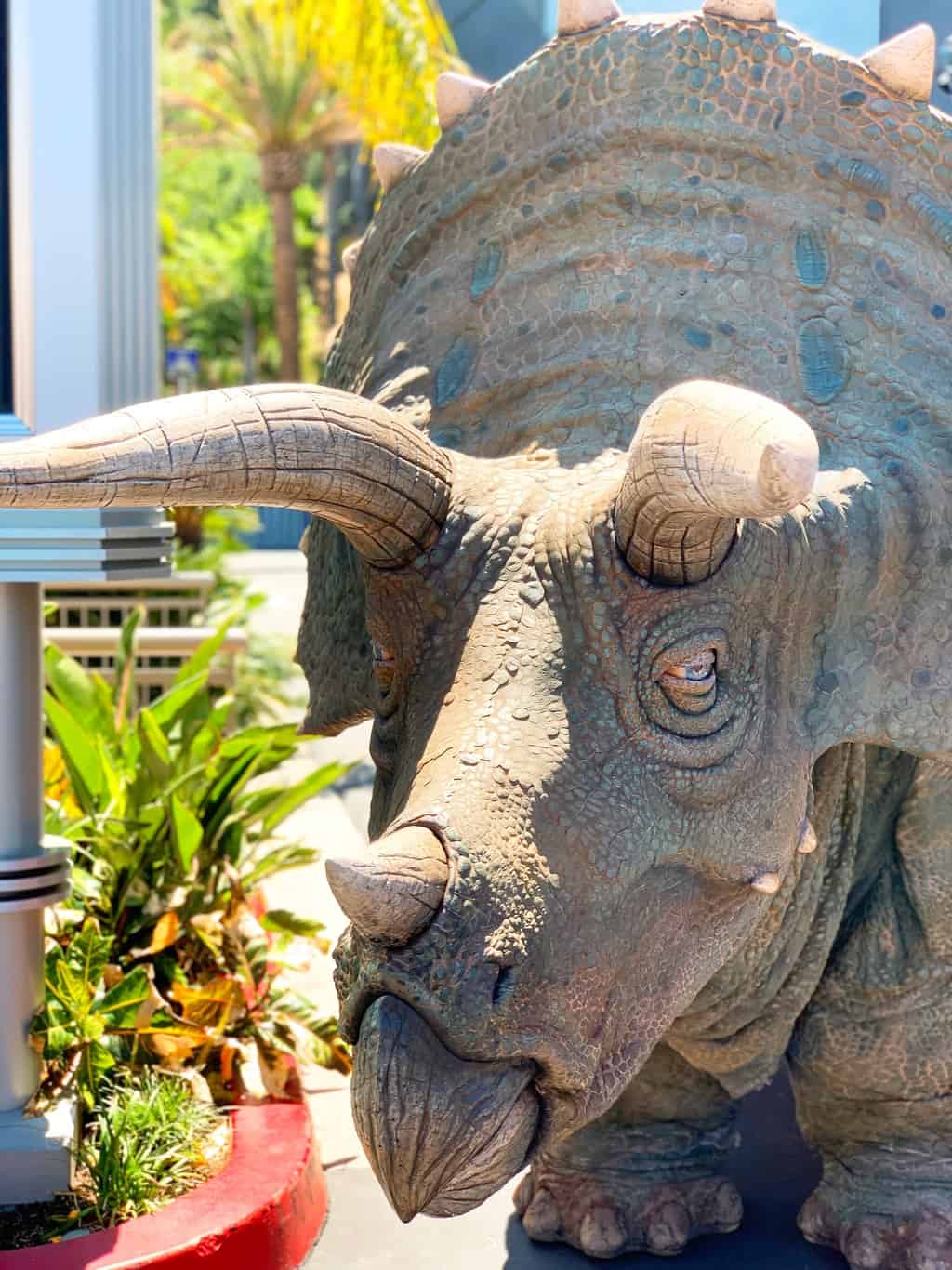 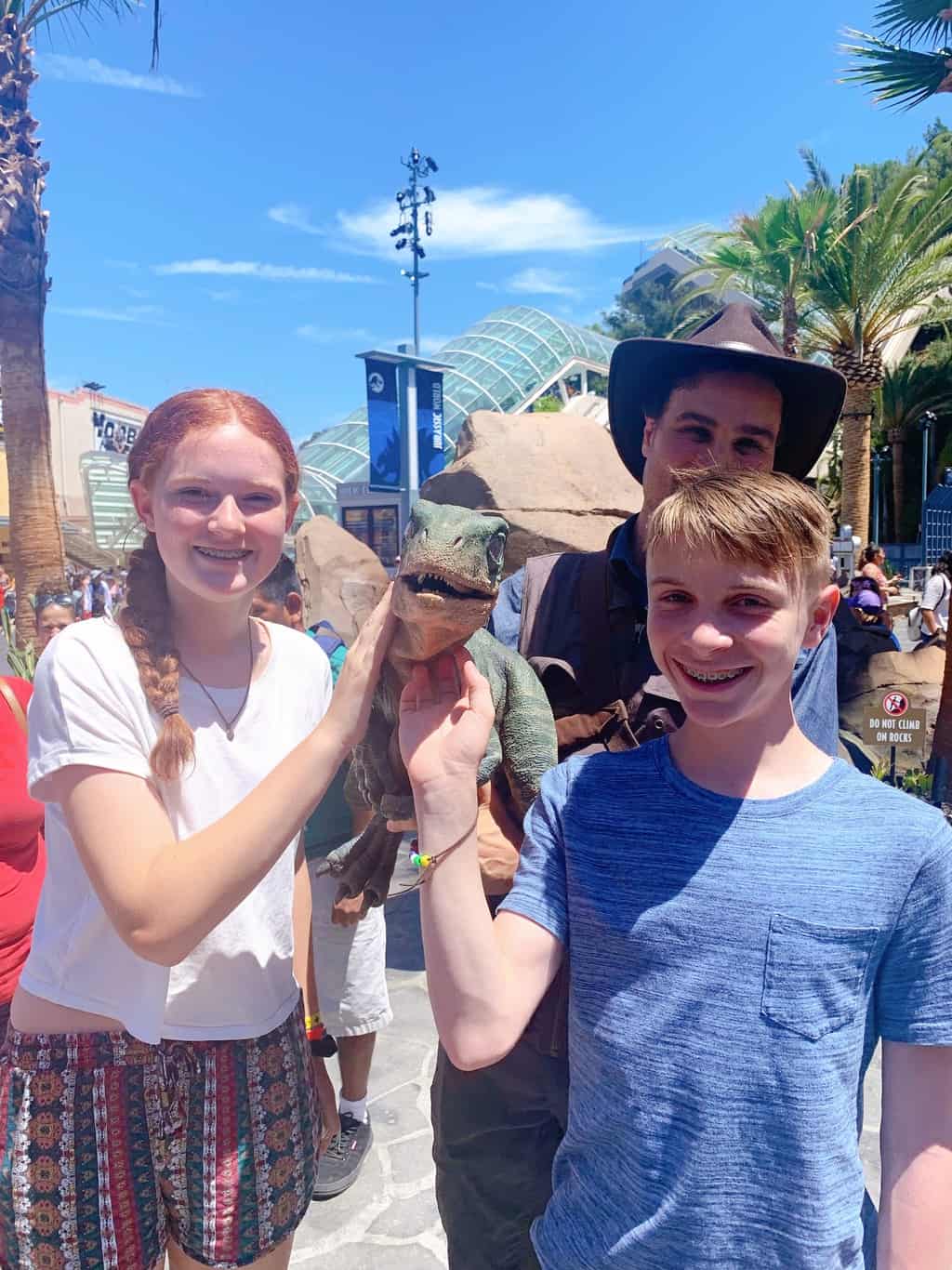 For the little ones, take them to the new interactive DinoPlay for kids where they can excavate giant dinosaur fossils at the discovery dig site, explore a full-size T. rex skull and dinosaur eggs or play on the jungle climber, a rope plank bridge and more.

At the Isla Nu-Bar, guests can enjoy a selection of tropical inspired refreshments including an ice-cold blended Tropical Margarita, Piña Colada, or a Painkiller.  Or try a Tiki Tai, Bird of Paradise, Ti Peach, Rum Runner or Mai Tai.  Each Jurassic World inspired drink is available in one of three collectible tiki cups adorned with a pineapple leaf and edible orchid flower.

Finally, to commemorate your bravery of riding Jurassic World – The Ride visit the new gift shop at the theme park called Jurassic Outfitters.  Here, you’ll find a wide selection of limited-edition t-shirts, hats, drinkware, pins, jewlery and more.  And don’t forget to purchase your own souvenir ride photo to prove you made it out Predator Cove alive! 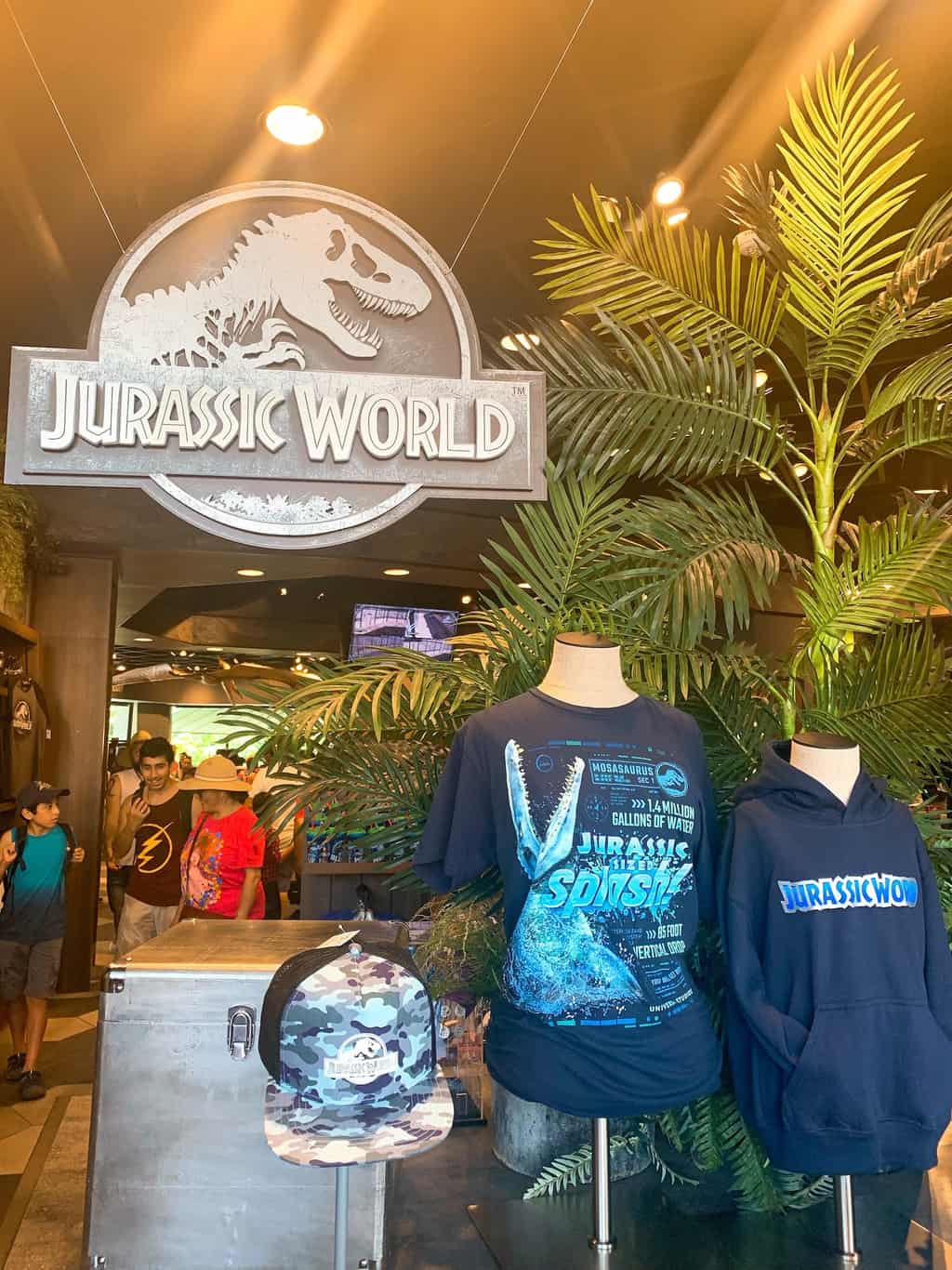 More Things To Do in Los Angeles

40 LA Museums To Explore With Kids

The Best Places To See Wildflower in Los Angeles

[…] Studios Hollywood’s EVE event!  Fill your day with heart-pounding rides and attractions like Jurassic World, then party til 2am with music, dancing, photo-ops and a special midnight countdown celebration […]