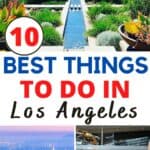 With so many amazing attractions, you could do something new in Los Angeles every day and not visit the same spot in a year. From Griffith Park’s attractions to the Los Angeles Zoo and in-between, the city has so much to offer. While downtown Los Angeles is home to impressive attractions, such as Angel’s Flight and The Last Bookstore, we recommend exploring other areas of the city.

10+ Things To Do In Los Angeles with Kids

So, here is a list of 10 amazing things to do in Los Angeles and take your family for a fun outing!

By taking a hike to catch an impressive view of the iconic Hollywood sign to the Griffith Park Observatory, Griffith Park is an adventure to itself. Children love hopping aboard the Griffith Park and Southern Railroad miniature train for a ride around other attractions, such as pony rides, a Native American village, and western town.

Grab a seat on one of the 68 horses for a fun ride on the Griffith Merry-Go-Round. The attraction has been providing thrills for young children since 1937. While at Griffith Park, also take time to explore Bronson Cave, a manmade tunnel made famous during the classic Batman television series.

For an eclectic look into California life, a visit to Venice Beach is must-see. With vendors lined up along the street selling souvenirs, gifts, and clothes, they offer a colorful addition to the beach. Venice Beach is a great location to take in beautiful views of the Pacific Ocean. From surfers riding the waves to those very waves crashing against the rocks along the beach, the scenes are amazing to watch.

You’ll find skaters challenging their skills as they ride at the skateboard park. Athletes work out at the outdoor gym, lifting weights at the same spot where actor and former Governor Arnold Schwarzenegger worked out as a younger man. Street musicians, magicians, and others entertain for tips along the beach.

Combine the best of going to the beach with an amusement park with a visit to the Santa Monica Pier. The west coast end of the famous US Route 66, Santa Monica Pier is an excellent spot to spend the day on the beach, soaking in the sun, building sandcastles or swimming in the Pacific Ocean.

Then, as the sun begins to set, head to the pier, where you can enjoy carnival-style food and hang out at Pacific Park, home to 12 fun rides, including a solar-powered Ferris wheel and roller coaster. Try your luck at the park’s Midway games or just enjoy people watching.

Step back to the days when dinosaurs roamed the Los Angeles area. Watch as a T-Rex fossil closes in on its prey, or check out the fossils of dinos such as a triceratops at the Natural History Museum of Los Angeles. With more than 300 fossils on display, kids of all ages will have a blast exploring California life from 65 million years ago.

The Butterfly Pavilion, open March-September, features about 30 species of butterflies as they migrate through the area, creating a colorful and fun exhibition. The Nature Garden invites you to explore more than 600 types of plants, home to birds, lizards, and more. Catch a unique view of the world by watching films at the 3D Theater. The museum also hosts a series of special exhibits throughout the year.

Kidspace Museum is the perfect place for young children to explore and learn while having fun. From the ant tunnel, where kids become ants and learn how a colony works, to the imagination workshop, where they can build things, tinker with others, and use their imagination to explore their world, the museum offers a variety of activities for them to try. They can challenge their skills on the rope and the climbing wall, among the other activities awaiting your family at Kidspace Museum.

With more than 2,200 animals, the Los Angeles Zoo is the place to see animals such as tigers, lions, bongos, and orangutans. So many animals and unique exhibits, including the Rainforest of the Americas, offering a look at life in the Amazon. The Lair is home to reptiles and amphibians from around the globe, such as alligators, vipers, green mamba, and a Madagascar gecko. During the holidays, enjoy their winter lights show, LA Zoo Lights.

For a cultural outing, the Huntington Library, Art Museum, and Botanical Gardens offer a unique experience by combining three attractions into one. The Library Exhibition Hall hosts ongoing and special exhibits, such as a collection of William Shakespeare’s plays. Featuring European art from the 15th century and American art dating back to the 1600s, the Art Galleries provide an interesting look at classic and modern art.

With 16 nature gardens covering 130 acres, the Botanical Gardens feature colorful and fragrant gardens, including plants native to California, desert cactus, and roses, as well as a conservatory and mausoleum.

The California African American Museum looks at the history and cultural contributions of African Americans in the state. With a collection of classic art pieces to special exhibits, the museum takes a unique approach to sharing the story of African Americans. La Plaza de Culturay Artes explores the cultural influences of Latinas/Latinos in Los Angeles through art, exhibitions, and special programs.

Nicknamed the “Central Park of Los Angeles,” Los Angeles State Historic Park is one of the city’s most beautiful outdoor attractions. The 34-acre park is home to a variety of public art displays, concerts, and walking trails.

For a fun look at Los Angeles culture, check out El Pueblo de Los Angeles. Located in downtown LA near Union Station, El Pueblo de Los Angeles is home to great Latino shops and restaurants. You’ll enjoy watching traditional dances by Latin and Native American groups. Visit the El Pueblo Historical Monument, considered the beginning of Los Angeles. Besides the beautiful and colorful scenery of the plaza, you may also want to check out Union Station, which is home to Amtrak stops. The train depot features a classical architectural design.

Whether you’re an outdoor enthusiast, art aficionado, or someone who enjoys history and fun places to explore, Los Angeles offers something for everyone. Families, couples, and friends will enjoy exploring the city’s attractions.