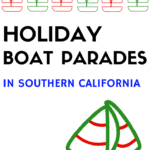 There’s nothing better than watching a parade during the holiday season.  Wait!…maybe there is.  It’s a boat parade!  You can’t help but get into the spirit of the season with lights gleaming off the cool ripples of the water and the holiday sounds coming from the lavishly decorated vessels.

That’s why at SoCal Field Trips, we have created an extensive list of Holiday Boat Parades in Southern California for your enjoyment! 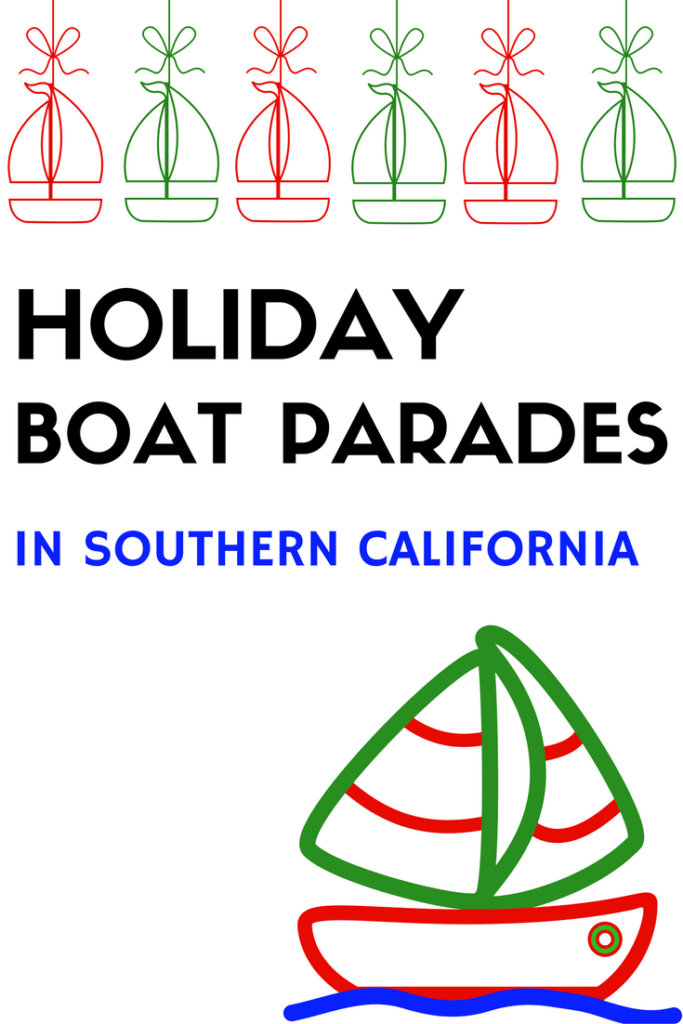 From Santa Barbara to San Diego, we have listed over 14 spectacular events.  You can either attend a large one like the L.A. Harbor Holiday Afloat Parade with over 100 boats or a smaller one such as the Naples Island Annual Boat Parade, which has a hometown feel.  So spend the evening with your family and friends down at the water front enjoying the sights and sounds of the holiday season!

This year’s parade theme is “Surfin’ USA” where 100 boaters compete in the categories of style, intricacy and outlandishness.  Past years’ entries have featured towering light displays and inflatable snowmen riding motorcycles and planes. In 2008, one boater even outfitted his craft with rotating wooden attachments that gave the appearance of dolphins swimming alongside.  The parade starts by the water’s edge. 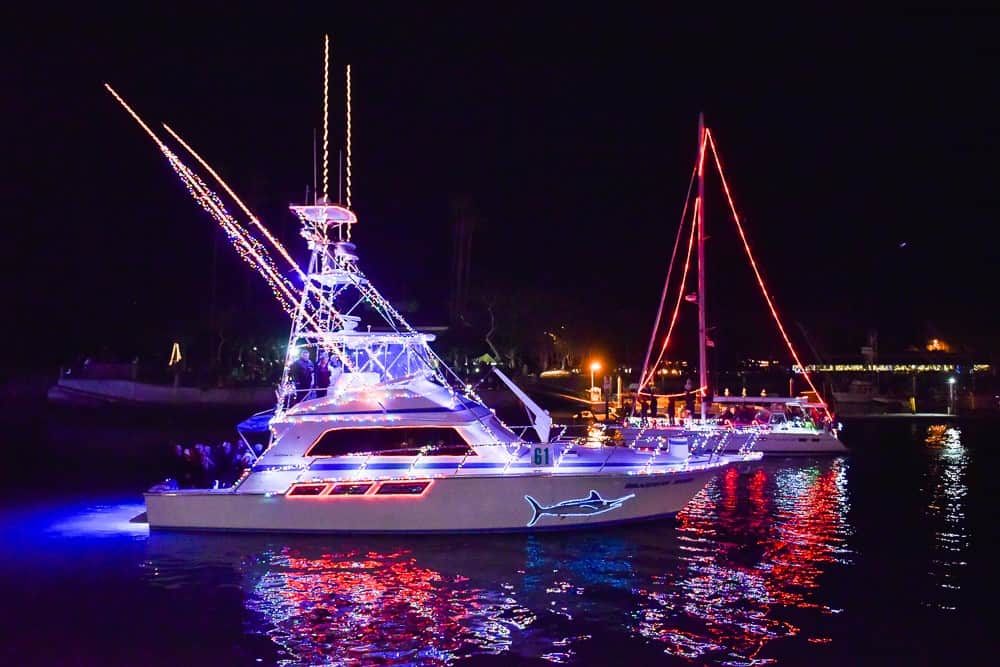 With a fun new parade theme every year, decorators have a wide list of songs and start to choose from. Besides the fun and excitement, they have 16 trophies to award in categories ranging from ‘Most Religious’ to ‘Best Commercial Entry’.  Unlike many other boat parades, the Huntington Harbour Boat Parade is an entirely volunteer effort. 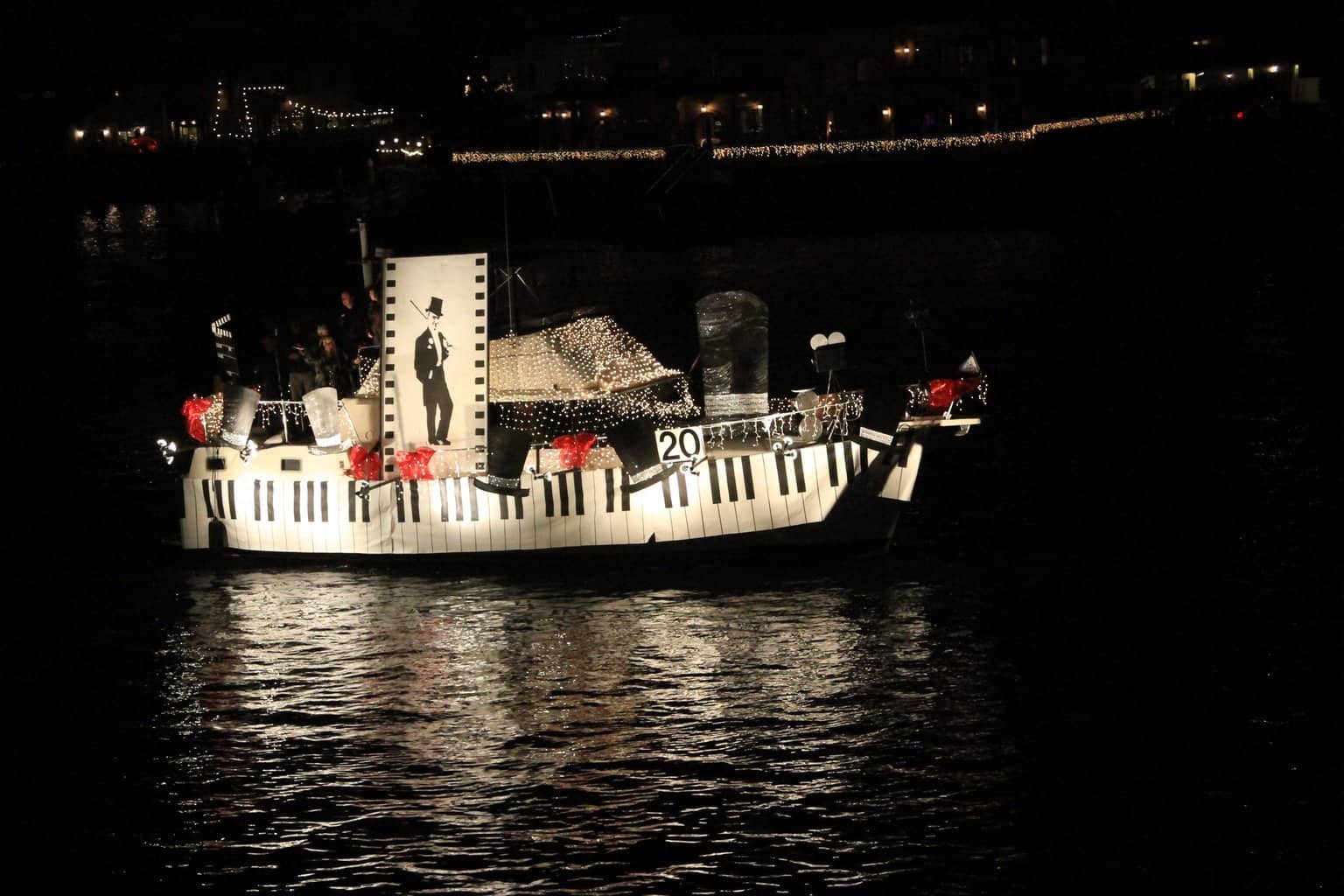 The 114th Christmas Boat Parade is one of the oldest and most popular holiday traditions in southern California and even the nation.  In 1908, a gondola and eight canoes decked out in Japanese lanterns started the tradition, which has grown into a spectacle expected to draw more than a million viewers over its five nights.  The parade starts at 6:30 p.m. with boats leaving from Bay Island, making their way around the harbor, and returning at 9 p.m.  In all there are just under registered 100 boats taking part in the contests.

Parade participants will start from the east end of Lido Island following the celebrated route, with the first public viewing destination at the 10.5-acre Marina Park. The community park offers 177 parking spaces, nautical-themed playground, picnic area and sailing center, and is also the largest public viewing area along the parade route, creating an optimal location to gather and enjoy the festivities.

Residents and visitors will have optimal viewing of the beautifully decorated yachts, boats, kayaks and canoes sail in the parade from the Dine & Watch waterfront and Dine & Walk dining options within walking distance of the many public viewing spots. 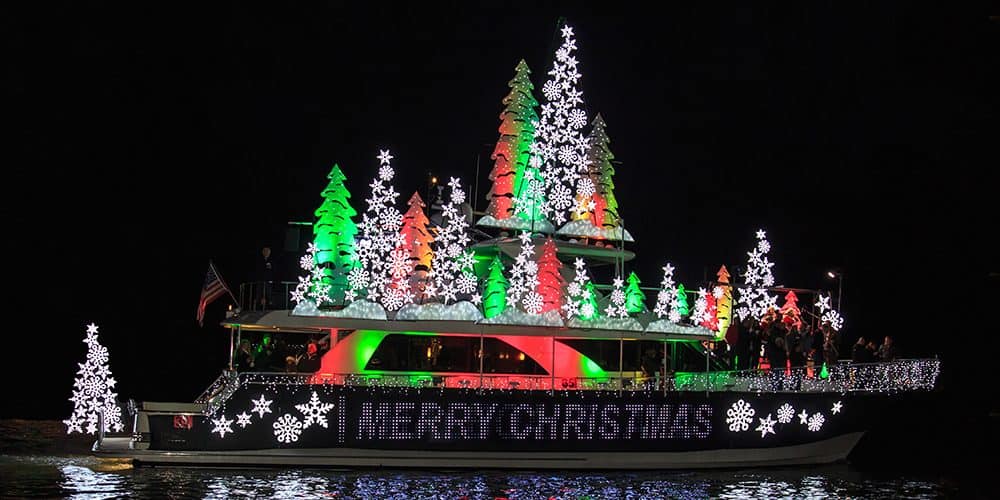 A truly local holiday tradition returns with the annual Venice Canals Holiday Boat Parade!  Gondolas, row boats, kayaks and other mini vessels are decked out in twinkly lights and paddled by locals in Santa suits and pointy hats to the theme of Jingle Bell Rock.  The parade route begins at Eastern and Sherman Canals—to catch a glimpse of everyone at the start, arrive by 3:30 p.m. when they all line up. 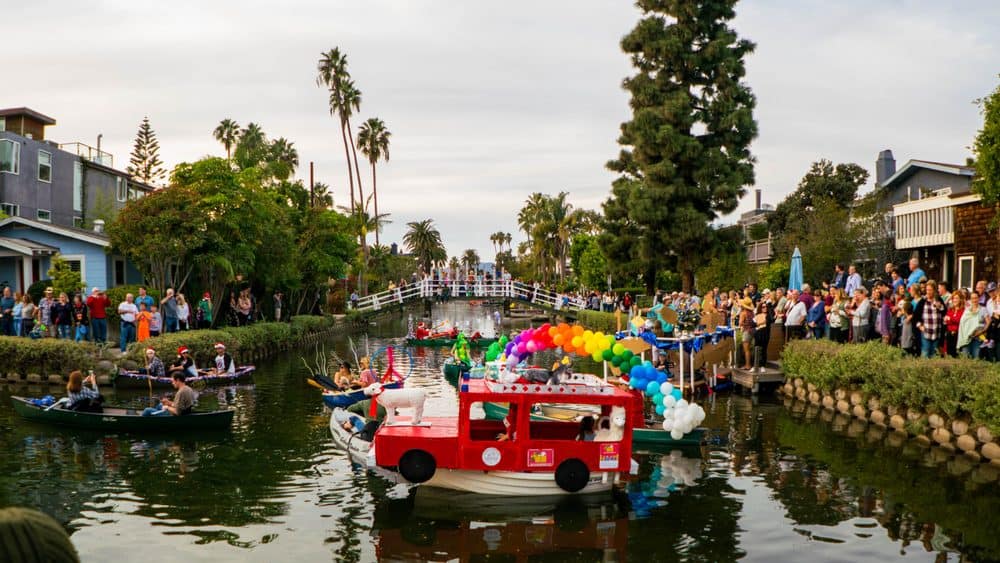 Sponsored by the Port of Los Angeles, the parade starts in the East Basin near Banning’s Landing Community Center in Wilmington and takes approximately 90 minutes to cover the entire parade route up the Port of Los Angeles Main Channel. Viewers are invited to enjoy festive pre-parade events at Banning’s Landing Community Center and aboard the Battleship IOWA in San Pedro.  Spectators may view the procession from several points along the Main Channel, including:

Numerous boats decorated with holiday themes parade through the marina to participate in a contest.  The vessels are judged for Best Theme, Best Music, Best Lights, Best Animation, Best Spirit, Best Live Band and other categories.  A traditional fireworks display kicks off the evening at 5:55 pm on the jetty near the entrance of the main channel.

You can view the parade from anyone of the many restaurants in Fisherman’s Village or stake your place along the channel.  Arrive early to grab the best seat!  Spectators will be able to park in any one of the ten county public parking lots in the Marina  Parking fees for all county lots are waived.  No street parking is allowed. 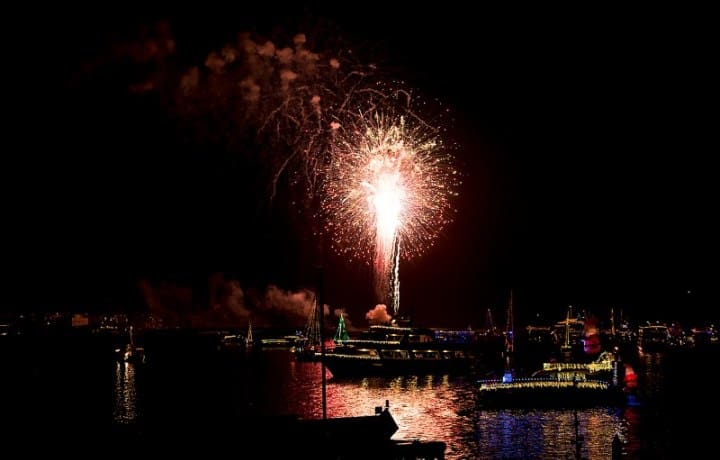 Shoreline Yacht Club presents the annual parade of 1,000 lights at 7 pm.  The best places to view the decorated vessels will be at Shoreline Village, Rainbow Harbor and from the Queen Mary.  The parade route will begin outside Shoreline Marina, move toward Island White, circle near the beach, move into and through Shoreline Marina and on to Rainbow Harbor past Parker’s Lighthouse Restaurant, Pine Avenue Pier, Gladstone’s departing Rainbow Harbor passing by the Queen Mary.  The public is invited to participate as a spectator or by entering a boat in the parade.

Paid parking is available at Shoreline Village, the Aquarium of the Pacific and the Pike.  Metered street parking and pre-paid ticket boxes are available at the Downtown Marina. 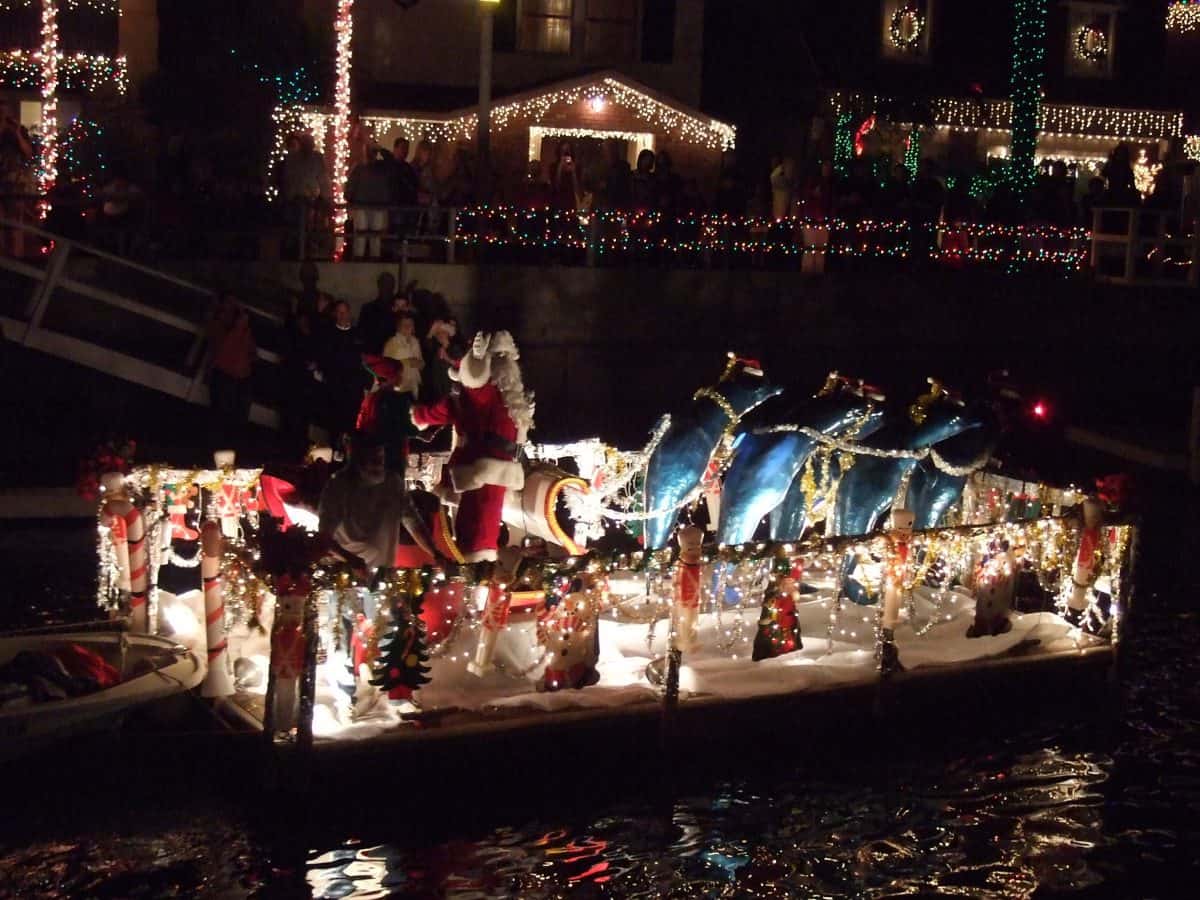 Boats decorated in a festive holiday spirit will circle the marina three times and be judged in a variety of categories.  The event kicks off with a Holiday Concert and Santa on the Pier from 2 – 4 pm. 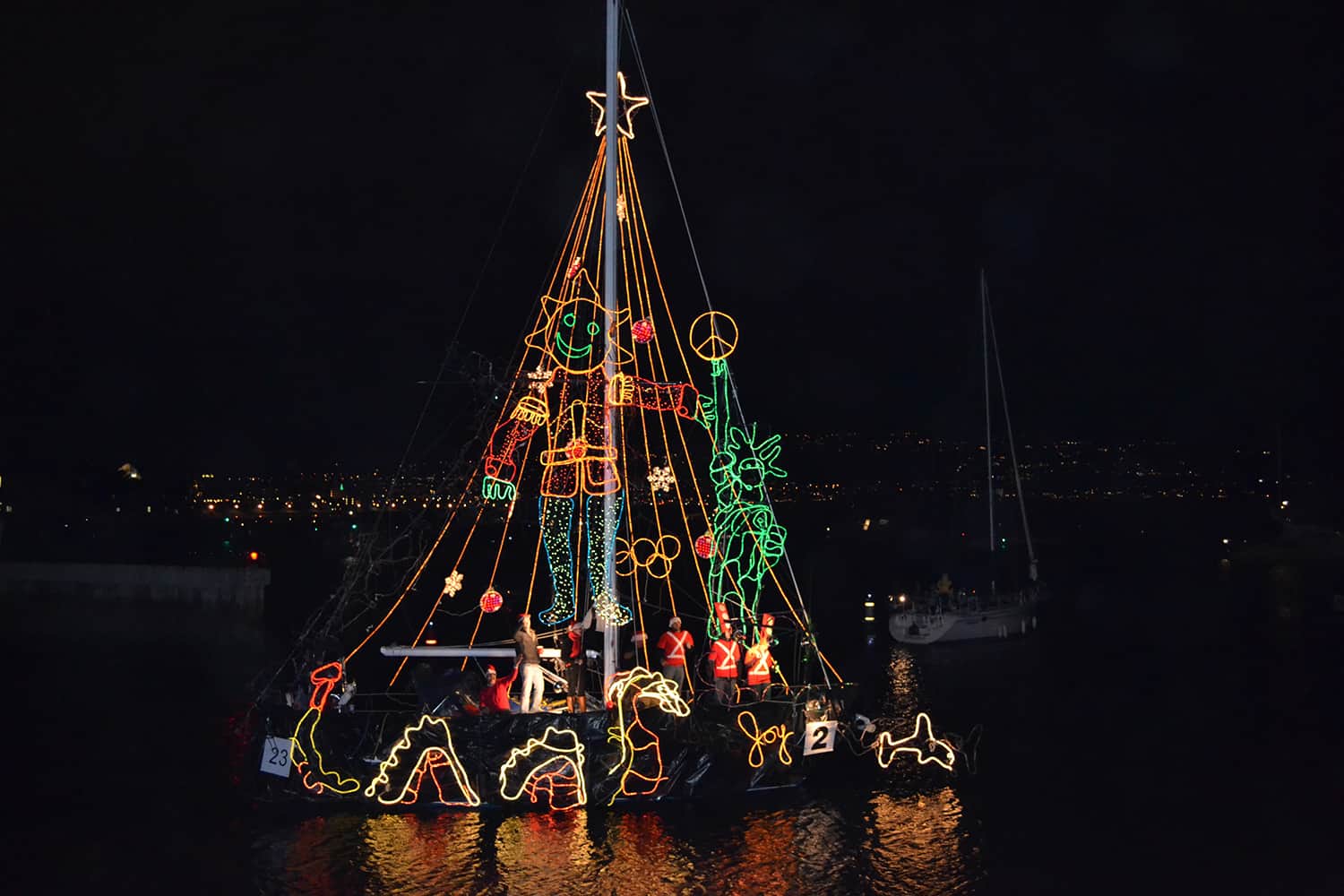 The large boat parade starts at 6 p.m. with the small boat parade following at 6:30 pm.  The parade begins off Naples Plaza Park, with the large boats cruising along the outside of the islands and small boats navigating the canals.

Free parking is available at Alamitos Bay Marina off 2 Street and Marina Drive, just over the Davies Bridge from Naples.  Mothers Beach off Ravenna and Appian Way has metered parking, while Bayshore and Ocean Boulevard offers paid beach parking. 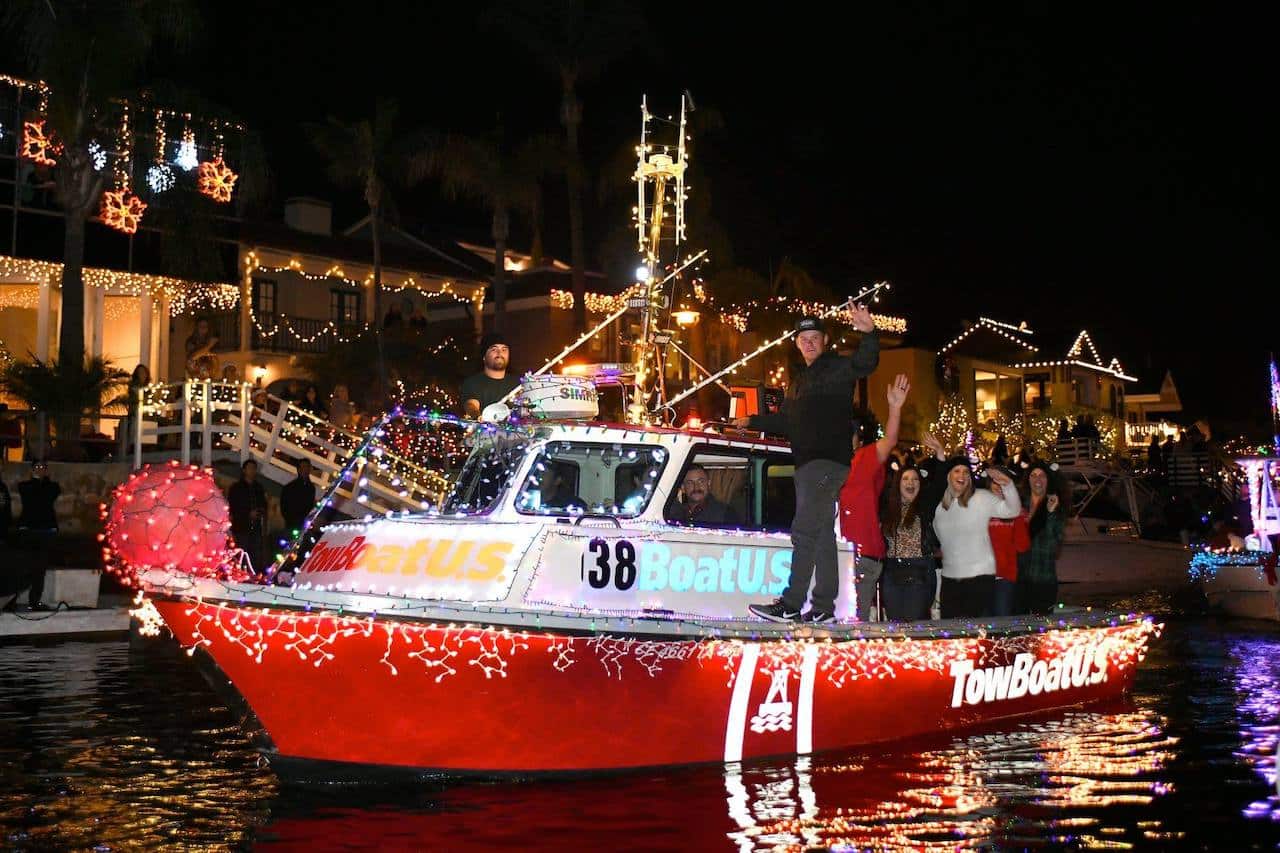 Fishing boats, sail boats, yachts, kayaks and dingys dressed up in holiday swag circle the Oceanside Harbor to enchant onlookers at the harbor, restaurants and beach.  Many of the boats feature people dressed up like Santa waving to the crowd!

One of the best viewing spots is along the side of the Oceanside Harbor near the fishing dock and police station. From this vantage point, you can see the parade twice.  The concrete walkway that surrounds much of the harbor is also good for spectating the event.

The annual San Diego Bay Parade of Lights has been a holiday tradition in San Diego since 1971.  The procession of approximately 80 lavishly decorated boats is also one of the most iconic events in the region.  This year’s theme is “The Twelve Day of Christmas”.  The parade starts at 5:30 pm and follows a predetermined parade route.

The procession takes around two hours and the best spots to get a good view are Shelter Island (at the start of the route), Harbor Island, The Embarcadero, Seaport Village and the Ferry Landing on Coronado. 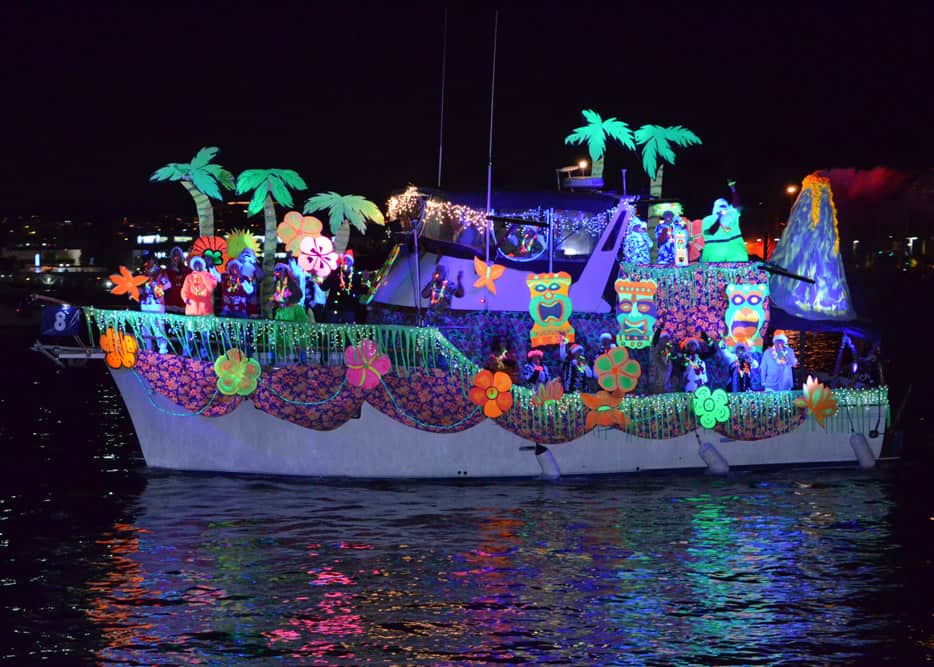 The 35th Annual Parade of Lights festivities begin with a Santa’s Village event at 3 p.m. on the City Pier.  At 5:30 pm the annual boat parade will begin with approximately 25-50 boats motoring, sailing, and paddling the Santa Barbara Coastline.  The event culminates with a 5-7 minute fireworks display at approximately 7:00 p.m.  The best viewing locations include Stearns Wharf and the breakwater. 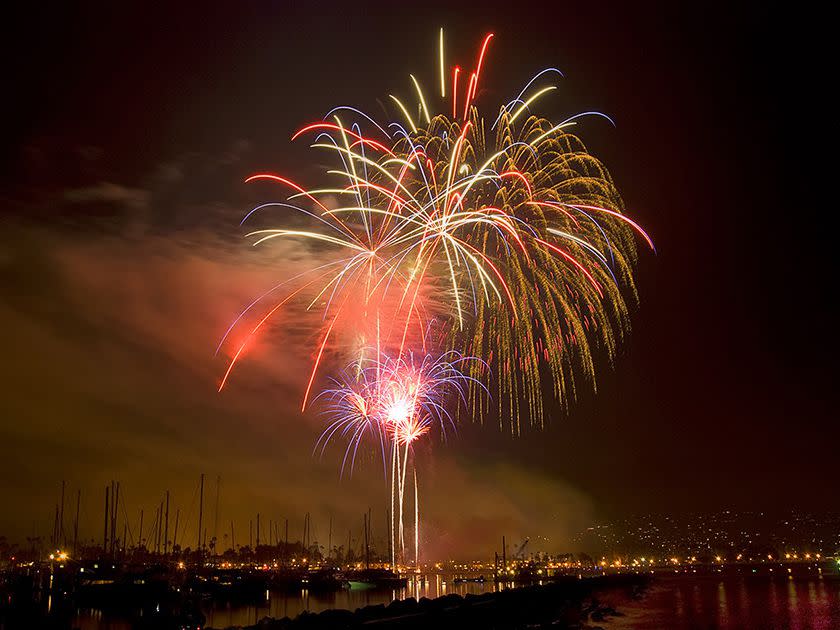 The Channel Islands Harbor Parade of Lights is a time-honored tradition that kicks off the holidays with a full day and evening of family fun, thousands of sparkling lights dancing on the water and the magical moment when Santa flies across the sky marking the beginning of the parade.

Children’s activities and artists market will take place at Marine Emporium Landing, meet Santa, enjoy snowplay in the morning and strolling carolers mid-afternoon.  The parade begins at 7 p.m. and can be viewed from parks and walkways that line the route as well as from most Harbor restaurants.  Boat charters are available for those who want to watch the parade from the water.  The parade starts in front of Peninsula Park and heads to the Main Channel, turns at Hobie Beach, loops in front of the launch ramp then heads back to Pacific Corinthian Yacht Club and repeats the route for second run. 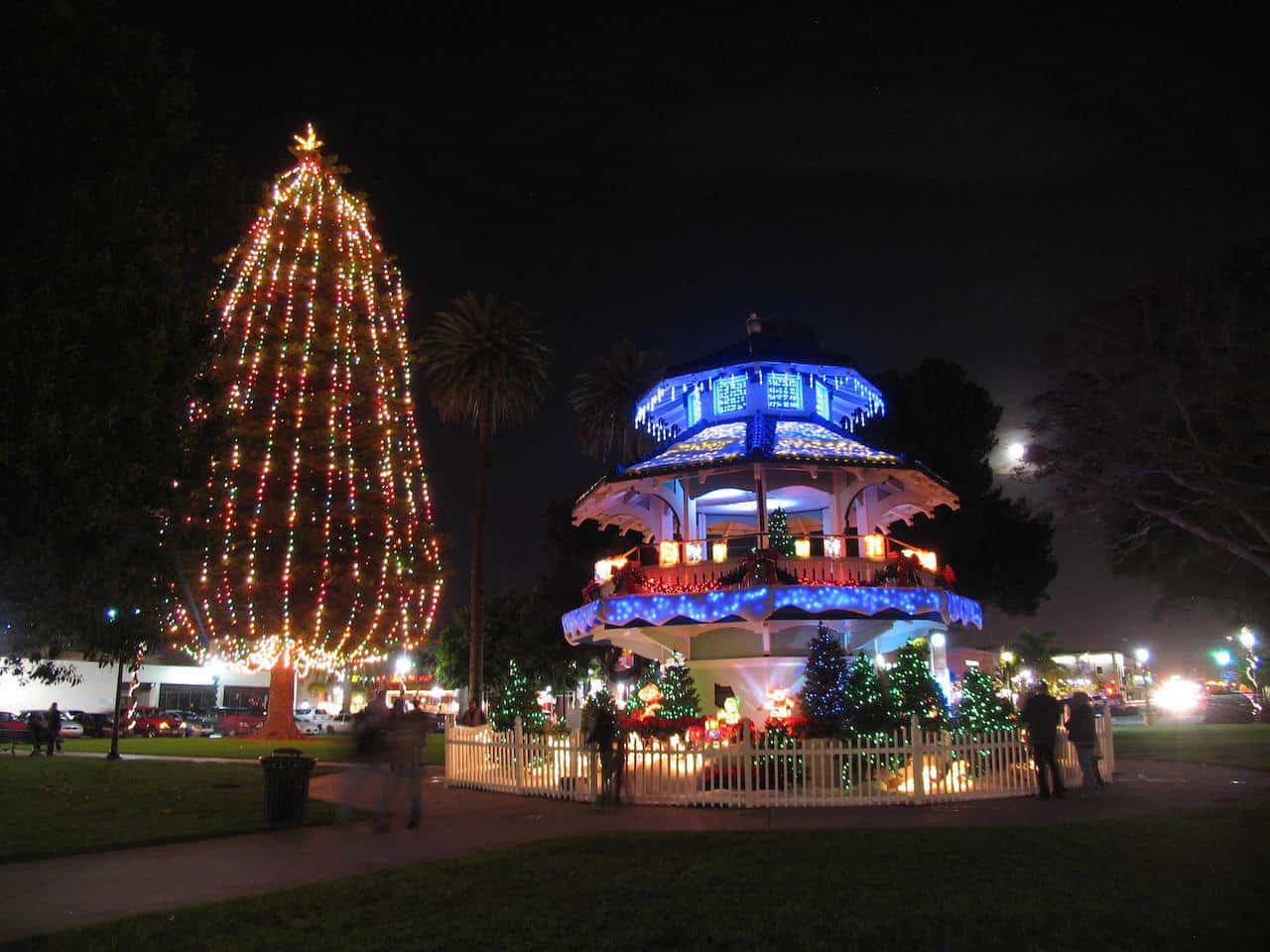 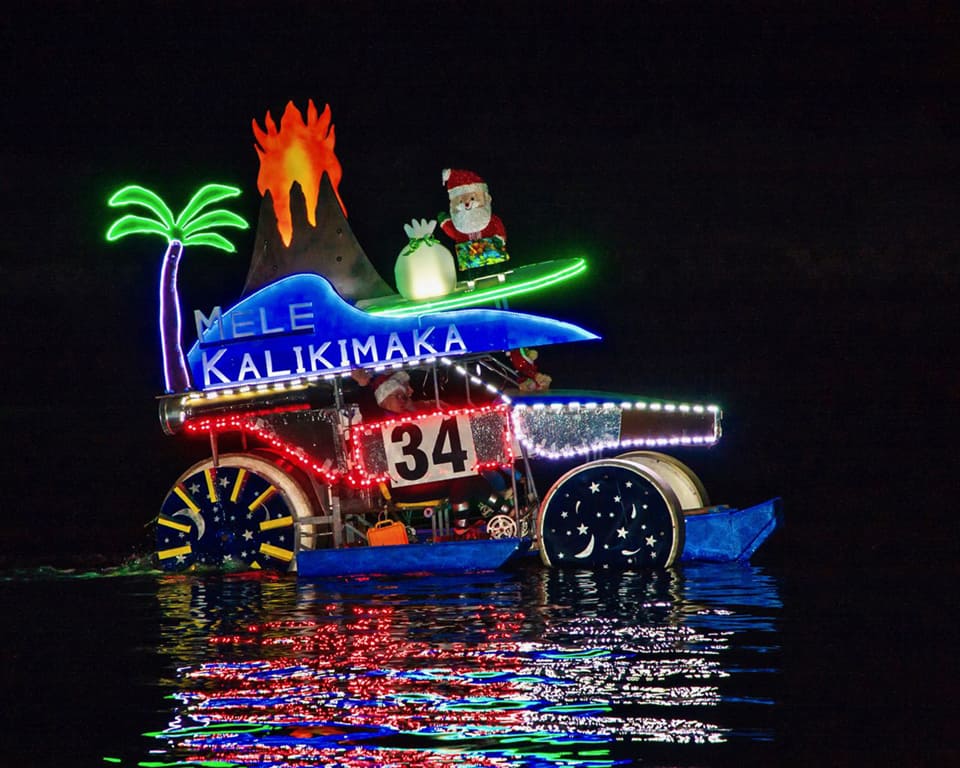